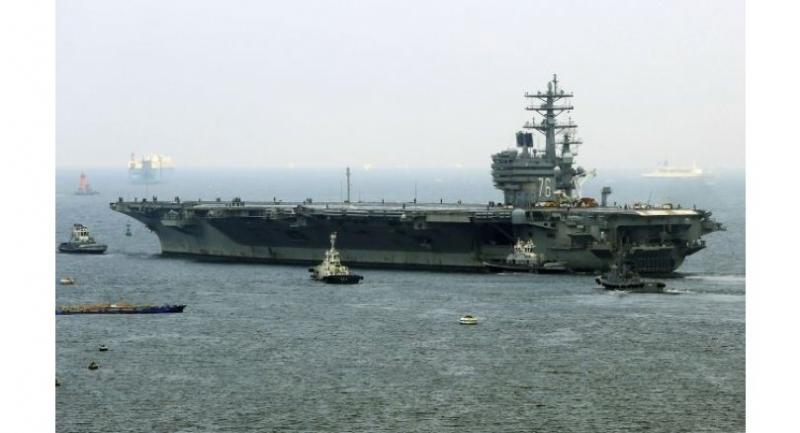 SEOUL - The United States is expected to dispatch an aircraft carrier strike group including the USS Ronald Reagan this month for a joint exercise with the South Korean Navy.

The United States is expected to dispatch an aircraft carrier strike group including the USS Ronald Reagan this month for a joint exercise with the South Korean Navy, a defense official here said Sunday.

“We are discussing the plan to dispatch the aircraft strike group, including the nuclear-powered aircraft carrier USS Ronald Reagan, to the East Sea around Oct. 15,” the military official said on condition of anonymity.

“The military group will carry out a high level joint exercise in the sea with the naval forces here.”

The strike group will also include guided missile cruisers such as Aegis-equipped destroyers and Ohio-class submarines that carry Trident missiles that have a maximum vertical range of 13,000 kilometers.

The maritime exercise will focus on detecting and tracing North Korean ballistic missiles under simulated conditions. The two allies will share information to practice intercepting the missiles.

The aim of the exercise is to boost the allies’ combined capabilities to respond to the North’s escalating military provocations and threats against the US.

North Korea has threatened to launch missiles into the seas surrounding Guam to demonstrate its capabilities, and high-level officials have said that a nuclear bomb test in the Pacific could be carried out.

“We will also run an exercise targeting submarine-launched ballistic missiles along with a live fire exercise.”

In a show of force against the communist regime, the US Air force flew a squadron of B-1B strategic bombers and fighter jets close to the North’s east coast on Sept. 23.

USS Ronald Reagan is a Nimitz-class, nuclear-powered aircraft carrier that has its home port in Japan’s Yokosuka Naval Base. The 333-meter-long, 100,000-ton flattop has a deck the size of three football fields and can carry up to 80 aircraft of fighter jets and helicopters. It has a crew of 5,000.