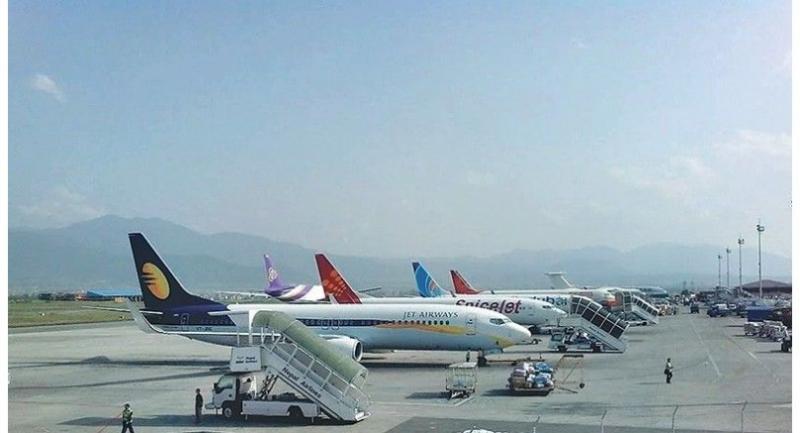 KATHAMNDU - Despite severe congestion, traffic continues to balloon. Airport expects to receive a record number of flyers this year.

The Tribhuvan International Airport (TIA) has witnessed a solid growth in the first half of 2017, setting the stage for receiving a record number of flyers this year.

According to TIA data, 1.87 million travellers passed through the airport’s facilities in the first six months of 2017, up 12.79 percent compared to the same period last year.

Nepal expects to grab a larger share of the Chinese outbound travel market after China’s announcement of Nepal Tourism Promotion Year 2017 in a bid to encourage its citizens to visit the Himalayan republic.

Each year, 120 million Chinese vacationers head to foreign destinations, which make China the biggest tourism source market in the world.

“Despite congestion at the TIA, we are expecting a record number of tourists this year, which will increase travellers’ movements at the airport,” said Birendra Prasad Shrestha, spokesperson for the Civil Aviation Authority of Nepal (Caan).

The delay in the TIA improvement project has, however, been a big setback.

The completion date for the $92-million project has been pushed back to 2019 from the proposed date of March 2016. After the completion of the project, the TIA will be able to handle more than 5.85 million passengers annually as well as accommodate bigger aircraft.

“Obviously, we are facing traffic congestion at the airport and have restricted new international airlines from launching their Nepal connectivity. But things will improve soon,” he said.

According to Caan, construction of new terminal building is expected to be completed within one and a half years.

Likewise, Caan has planned to construct 16 new parking bays. Of the total parking bays under the plan, four are expected to be completed within a year, said Caan.

“The parking bays and expansion of the international terminal building will enhance the airport facility as well as the safety standard of the TIA,” said Shrestha.

A breakdown shows India’s Jet Airways topped the list of carriers with the highest number of passengers. Jet, which serves Delhi with three flights and Mumbai with two flights daily, flew 227,512 passengers in the first six months of this year, up 47.62 percent.

Nepal Airlines is the second with a passenger carriage growth of 17.52 percent. It flew 210,131 passengers during the review period.

percent, as it flew a total of 168,677 passengers. Another low cost carrier, Air Arabia, however, saw its passenger carriage drop by 6.68 percent to 155,004. However, the carrier stood fourth in terms of passenger carriage.

Doha-based Qatar Airways slipped to fifth spot with a sharp 25.46 percent drop in passenger carriage to 155,004 in the first six months of 2017. Indian Airlines saw its passenger numbers increase 8 percent to 97,462.

The Malaysia-based low-cost airline Malindo Air saw the strongest passenger occupancy recording 132.56 percent growth. It flew 68,115 passengers in the review period. However, another low-cost carrier from Malaysia, Air Asia, saw its passenger number dropping by a whopping 50.69 percent to 43,375.

Nepali carrier Himalaya Airlines that started its first scheduled flight operations in May last year, flying directly to Doha of Qatar, carried 56,213 passengers in the first six months of this year.

China Southern Airlines that had resumed flight from April 2016 also saw a very strong growth. The carrier flew 60,515 during the review period.