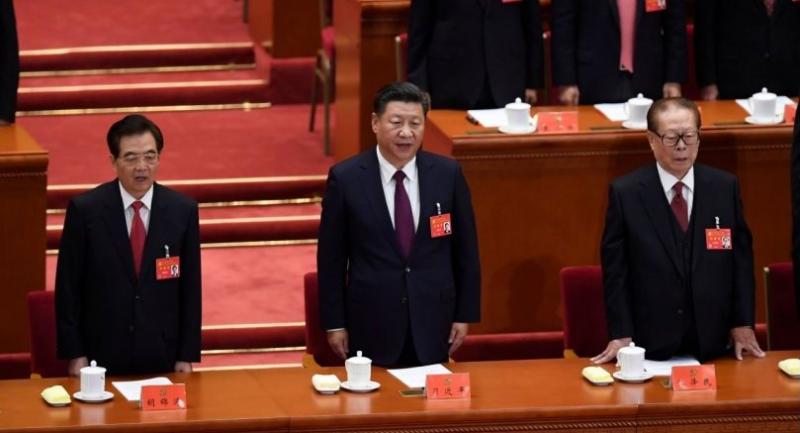 China's President Xi Jinping (C) sings the National Anthem with former presidents Jiang Zemin (R) and Hu Jintao (L) during the opening of the 19th Communist Party Congress at the Great Hall of the People in Beijing on October 18,.//AFP

The move hit users of the ubiquitous Chinese social media platforms WeChat, QQ, Weibo and even Alibaba's payment platform Alipay, though it appeared only to affect those with accounts registered on the mainland.

"WeChat is undertaking system maintenance. From today until the end of the month, users will temporarily be unable to change their profile picture, nickname and tagline," the app, run by internet behemoth Tencent, announced Tuesday.

Chinese authorities have kicked both online and offline security into high gear for the week-long, twice-a-decade party Congress that will reshuffle top leadership positions.

The ban on profile picture updates could be a bid to avoid the kind of defiance seen during Hong Kong's pro-democracy Umbrella Revolution in 2014, when Facebook users changed their profile pictures to yellow ribbons symbolising universal suffrage.

In recent weeks the service of messaging app WhatsApp -- which provides an end-to-end encryption function unlikely to please censors -- was also severely disrupted.

Chinese President Xi Jinping has overseen a clampdown on internet freedoms since he came to power in 2012, tightening censorship in a country where young people are avid users of social media.

In his opening speech to some 2,300 congress delegates gathered in the cavernous Great Hall of the People, Xi said the party should "provide more and better online content and put in place a system for integrated internet management to ensure a clean cyberspace."

Complaints about extreme over-crowding in the Beijing metro, subject to extra security checks during the congress, were scrubbed and photos of commuters crammed like sardines were deleted, according to Free Weibo, a website that archives items from social media that have been removed.

Platforms must now verify users' true identity before allowing them to post online, with certain content banned outright, including anything that damages "national honour", "disturbs economic or social order" or is aimed at "overthrowing the socialist system".

There was not a single critical comment to be found on Weibo about Xi's more than three hour-long speech Wednesday.

"The chairman spoke very well and hopes our country can be thriving and prosperous. He will lead the Chinese people to glory," one user wrote.//AFP