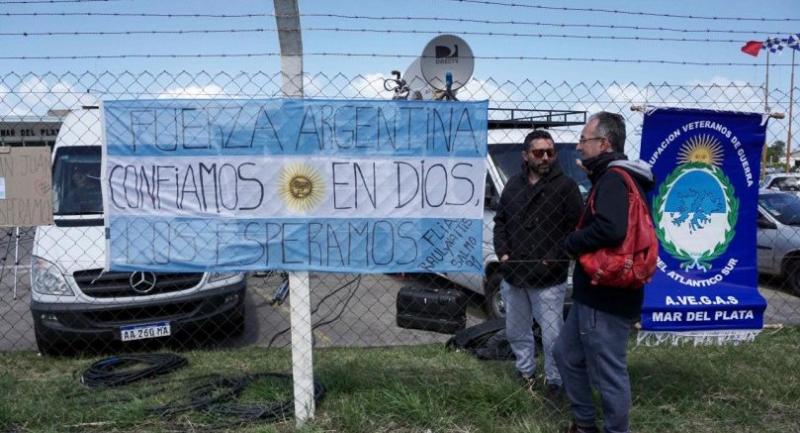 Banners and Argentine flags with message in support of submarine crew members are displayed outside Argentina's Navy base in Mar del Plata, on the Atlantic coast south of Buenos Aires, on November 19.//AFP

Mar del Plata, Argentina - A multinational armada of aircraft and vessels battled high winds and raging seas Sunday as they intensified their search for a missing Argentine submarine, after apparent attempted distress calls raised hopes the 44 crew members may still be alive.

There has been no contact with the ARA San Juan, a German-built diesel-electric sub, since early Wednesday. An air and sea search is under way with help from countries including Brazil, Britain, Chile, the United States and Uruguay.

Hopes of finding survivors were revived when the navy said Saturday that its bases had received seven satellite calls attributed to the submersible.

However, the navy was unable to confirm that those calls originated from the submarine.

"The communications are so short and the signal so low," Argentine navy spokesman Enrique Balbi said, later adding the military has yet to have contact with or detect radar from the sub.

The calls revived hopes that the submarine has surfaced, but a powerful storm that has whipped up waves reaching seven meters (23 feet) in height has made geolocation difficult, officials said.

Balbi said weather conditions were not expected to improve before Tuesday.

Despite the bad weather, "10 aircraft, both domestic and foreign, are in a search rotation 24 hours a day, each in a different area," he said.

He said the attempt to use a satellite phone indicates that "the submarine had to emerge to a depth that allowed the call."

The last regular communication with the San Juan was early Wednesday, when the submarine was 430 kilometers (270 miles) off Argentina's coast in the Gulf of San Jorge.

Rescuers are focusing on an ocean patch about 300 kilometers in diameter, radiating from the last point of contact.

US Southern Command has deployed a Navy P-8A Poseidon patrol and reconnaissance plane with a crew of 21, along with a NASA P-3 research aircraft, and other equipment and personnel.

The US Navy has deployed two unmanned underwater vehicles that use a sonar system to create an image of large sections of the sea floor.

Balbi said it was following the northward course the submarine would have taken toward Mar del Plata.

Relatives of crew members unfurled a flag at the naval base that read: "Be strong Argentina, We trust in God, We wait for you."

'Got to be afloat'

"We will do what is necessary to find the submarine as soon as possible," Argentine President Mauricio Macri wrote on Twitter.

All land communications bases along the coast were ordered to scan for any follow-up signals, as family members of the missing waited nervously in the coastal city of Mar del Plata.

Claudio Rodriguez, whose brother Hernan is aboard the submarine, was hopeful, saying the satellite signals suggested the vessel was still afloat and would be found.

"They've got to be afloat. Thank God," he said.

Among those on board is Argentina's first female submarine officer, 35-year-old weapons officer Eliana Krawczyk.

The navy has not ruled out any hypothesis. A spokesman said the most likely scenario given is that an electrical problem may have unexpectedly cut off the vessel's communications.

Prayers from the pope

The TR-1700 class submarine had been returning from a routine mission to Ushuaia, near the southernmost tip of South America, to its base at Mar del Plata, about 400 kilometers south of Buenos Aires.

It is one of three submarines in the Argentine fleet.

Sixty-five meters long and seven meters wide, it was built by Germany's Thyssen Nordseewerke and launched in 1983.

At the Vatican, Argentine-born Pope Francis said he offered "his fervent prayer" for the safety of the submarine sailors.//AFP