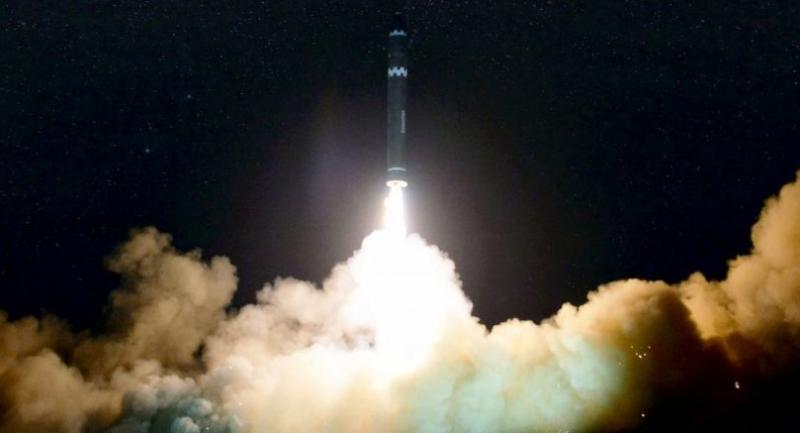 This photo taken on November 29 shows launching of the Hwasong-15 missile which is capable of reaching all parts of the US.//AFP

Hong Kong - Hong Kong carrier Cathay Pacific said Monday that one of its air crews spotted what they believed to be the missile fired by North Korea last week, as they flew between the United States and the southern Chinese city.

The North fired an intercontinental ballistic missile believed capable of hitting the US mainland last Wednesday. A statement from Cathay said a flight crew had that day sighted "what is suspected to be the re-entry of the recent DPRK test missile".

Cathay did not give the location of the flight at the time of the sighting, but said the crew of the CX893 flight between San Francisco and Hong Kong had notified Japanese air traffic control "according to procedures". Operations had continued as normal, the statement added.

Pyongyang said the missile reached an altitude of 4,475 kilometres (2,800 miles) and splashed down 950 kilometres from its launch site.

It also claimed the Hwasong-15 missile fired Wednesday can be tipped with a "super-large heavy warhead" capable of striking the whole US mainland.

Cathay said there was no current plan to change air routes, describing the flight as being "far from the event location".

"We remain alert and review the situation as it evolves," the statement said.

In a message shared with staff, Cathay general manager Mark Hoey said the crew had described seeing the missile "blow up and fall apart", the South China Morning Post reported.

Hoey said that another plane, CX096 which is a freight service between Hong Kong and Mexico, was only a few hundred miles away and could have been closer than the San Francisco flight, according to the report.

Cathay's management also tried to reassure staff in a memo which described the incident as rare and cited experts who said the chances of a missile striking a plane that it was not targeting were very low, Apple Daily reported.

Local media said crews flying between Hong Kong and Seoul were being issued with satellite phones.

Analysts remain unconvinced that North Korea has mastered the advanced technology to allow the rocket to survive re-entry to the Earth's atmosphere.

The months-long nuclear standoff between North Korea leader Kim Jong-Un and US president Donald Trump has fuelled concerns of another conflict, after the 1950-53 Korean War left much of the peninsula in ruin.

Air France in August said it was extending its no-fly zone around North Korea as a precaution after another missile launched from the country fell into the sea 100 kilometres (60 miles) from one its plane's trajectories.

Its caution came after the July 2014 downing of Malaysia Airlines' MH17 flight by a surface-to-air missile over Ukraine, killing 298 people.

Dutch-led investigators concluded that plane was downed by a Russian-made BUK missile transported from Russia into areas held by pro-Moscow rebels.//AFP