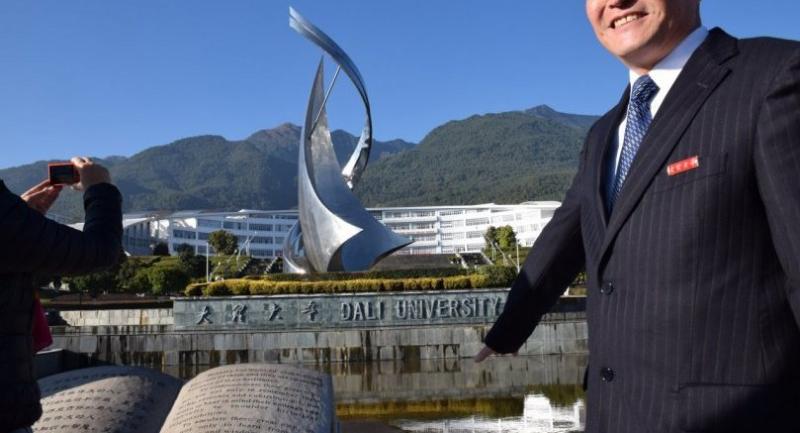 KINGDAO HARNSIRICHAI was dressed in Thai traditional costume while walking around the Dali University campus for the whole day on December 15, waiting to perform a Thai classical dance to greet foreign ministers and delegations from the Lancang Mekong Cooperation (LMC), who were there for diplomatic meetings. “I’m the only Thai student here so they told me to greet and perform a dance to show Thai guests, but I don’t know about the meeting,” she said.

While there are training opportunities and scholarships under the LMC framework, Kingdao studies the Chinese language at the university based on her own interest and pays for it herself.

“I know China is rising and growing. People of my generation keep saying that China will give us opportunities to make money,” she told The Nation. “So I saved all my money and came here to learn Chinese.”

After graduating with a bachelor’s degree in education from Dhonburi Rajabhat University, which has an exchange programme with Dali University, Kingdao said she hoped that learning Chinese would help her to be prepared in the future when China has more engagement and stronger relations with Thailand.

“I want to open a language school in Bangkok when I return. Since I graduated to be a teacher, teaching Chinese language would be a perfect job, right?”

The picturesque Dali University campus is among the Chinese educational institutions designated to support the LMC human development project to improve China’s status and spread Chinese knowledge, technology and know-how among people from other Mekong basin countries.

Long before the establishment of the LMC in 2015, Dali University had cooperative relations with many Thai universities including Burapha, Chiang Mai and Prince of Songkla. There have been more than 800 students and academics involved in several cooperation and exchange programmes since 2003, according to Duan Lin, chairman of the Dali University Committee.

The university has particularly strong programmes in medicine and biodiversity.

Kingdao said she had learned about Dali University after attending a one-month exchange programme three years ago.

“It would be better if our educational institutes in Thailand gave us more information and scholarships,” Kingdao said. “I’ve struggled a lot to enrol here since I have to pay 14,250 yuan [Bt71,250] a year for my education.”

However, she has a teaching assistant job at the university’s Thai Language Department that contributes to her tuition.

In Tianjin, where a high-speed train can reach Beijing in only 40 minutes, Pattana Traisikkha, a 20-year-old vocational student at the Tianjin Sino-German University of Applied Science (TSGUAS), said his life was a bit easier after he had obtained a partial scholarship. Pattana (with glasses) demonstrates robot controlling to his junior classmate

The Thai-Chinese student, who is also known also as Tang Zi Qing, finished his vocational certificate in electronics from Chitralada Vocational School three years ago before coming to Tianjin.

Initiated during the first visit of HRH Princess Maha Chakri Sirindhorn to the university in 2013, the cooperative effort enrolled an initial group of six Thai students at the campus, all of whom have finished their education, said Professor Zhang Xinghui.

Pattana is in the third class and plans to finish his diploma in mechatronics next year. “With a half scholarship from Chitralada, I have to pay Bt70,000 for the tuition fee, which is still relatively expensive compared to our standards,” he said.

“But it’s worth it, I think since I have learned a lot of advanced mechatronic technology and robotics,” he said. Mechatronics refers to a multidisciplinary field including electronics, mechanics and computer engineering.

“I’m learning about robot controls, which will be useful for assembly line production. Pneumatics and hydraulics are also my subjects, Pattan told The Nation, while showing junior classmates, including an Indonesian and Cambodian, how to control a robot in manual mode.

Chinese Prime Minister Li Keqiang announced in the first summit of LMC leaders in March last year that China would provide 18,000 scholarships and 5,000 training opportunities for students from Mekong countries over three years.

Both Dali University and the TSGUAS were designated in the plan, and officials and students from Mekong countries have subsequently poured into the campuses.

Students Pakamon Chaiyawan and Puri Boonyoprakan finished their degrees in agriculture from Lopburi Agriculture and Technology College before obtaining full scholarships for media and movie studies at TSGUAS’s Faculty of Art.

“Everything from the language to our major subjects was very hard when we started a year ago,” said Pakamon. “But it’s okay now since we can adjust and hope we will finish our degree here.”

In the future, students who do not have sufficient funds or are struggling with the Chinese language should be able to study in their home countries after Li announced vocational education and training centres in its Mekong partner countries.

The LMC and the training centres, as well as many other mechanisms for cooperation in the region, are being developed to serve China’s strategy of the “One Belt One Road Initiative” for growth and development, he said.