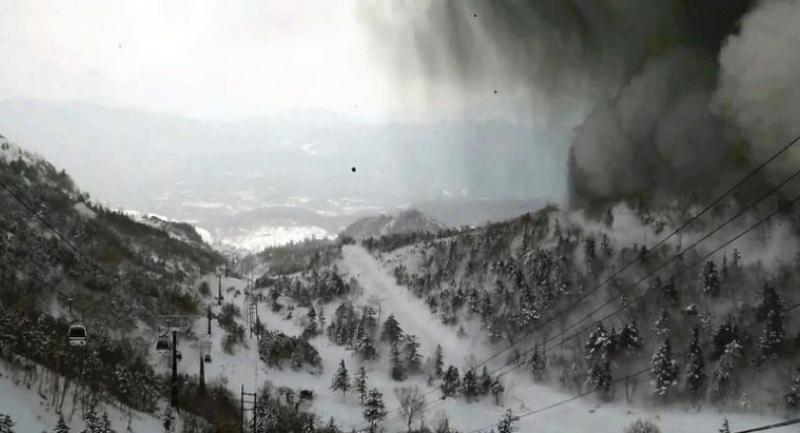 Tokyo - A Japanese soldier was killed on Tuesday after a volcano erupted near a popular Japanese ski resort, sparking an avalanche that left several injured and scores stranded up a mountain, officials said.

Footage broadcast on Japanese television showed thick black smoke interspersed with falling rocks sliding down the snow-covered side of the volcano towards a ski slope.

"One of the six members of the Self Defence Forces (injured in the incident) has died after being caught up in an avalanche," a defence ministry spokesman told AFP.

The ministry had earlier said that six infantry personnel who had been on a training mission on the mountain were hit by the avalanche but had been rescued.

The falling rocks kicked clouds of snow into the air as they made impact.

"Black smoke rose from the top of the mountain and we were told to evacuate inside 30 minutes later," a man who was at the ski resort told public broadcaster NHK.

Japan's Meteorological Agency urged nearby residents to stay away from Mt. Kusatsu Shirane, northwest of Tokyo, after it detected what it said was "slight volcanic activity."

He warned that the volcano could still spew more rocks and ash, and that there was a risk of further avalanches.

A local fire department official told AFP that 10 people had been injured in the incident.

"Five of them were seriously injured. We began sending the injured to a hospital," he said.

Among the injured were four people hurt by shattered glass while on a ropeway gondola at the ski resort in Gunma.

The official said an earlier report that one person was missing in the avalanche was not accurate.

A local town official said that a total of 78 people, some of them suffering injuries, were stranded at a gondola station at the top of the mountain.

The gondola has been stopped because of a power outage.

"We're now discussing how we can evacuate them," the official said.

NHK said that eight of those stranded had already been rescued.

Japan, with scores of active volcanoes, sits on the so-called Pacific "Ring of Fire" where a large proportion of the world's quakes and volcanic eruptions are recorded.

An estimated 63 people were killed in the shock eruption which occurred as the peak was packed with hikers out to see the region's spectacular autumn colours.//AFP