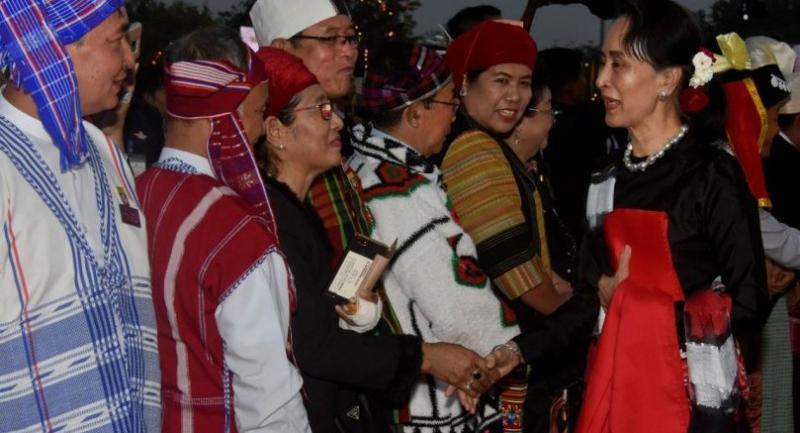 Two armed ethnic groups will sign on to a ceasefire in Myanmar on Tuesday in a ceremony the government hopes will showcase a significant victory for a peace process derided as "broken" by critics.

World attention has recently focused on the desperate plight of the some 700,000 Rohingya Muslims forced over the border into Bangladesh in western Myanmar by a violent military campaign.

But this is just one of some two dozen conflicts festering around the country's restive fringes, where ethnic minorities have been locked in decades-long battles with the state for more autonomy.

But there has been little to show for the effort, with swathes of the borderlands still embroiled in often drug-fuelled unrest that has displaced tens of thousands of people.

On Tuesday the government can claim a symbolic victory after the New Mon State Party (NMSP) and Lahu Democratic Union (LDU) ink the National Ceasefire Agreement (NCA) in Naypyidaw, joining eight other militias who had signed onto the pact before Suu Kyi took office.

The two groups have not actively clashed with the army for some time but were part of a bloc of powerful rebel armies that resisted signing the NCA under the former military-backed government.

"We believe in Daw Aung San Suu Kyi but we'll have to see what happens on the road ahead because the government and the military are not very united," LDU chairman Kya Khun Sar told AFP ahead of the signing.

Myanmar's powerful army has stepped down from junta rule but still controls the key home affairs, borders and defence ministries as well as a quarter of parliamentary seats.

This effectively gives it carte blanche to conduct whatever military operations it wants around the country.

Many are therefore skeptical of success for Suu Kyi's "21st Century Panglong" peace talks, named after the agreement signed by her independence hero father that promised autonomy to major ethnic groups ahead of the country's independence from Britain in 1948.

"Regardless of the theatre and pageantry of the NCA signing for the Mon and Lahu, the peace process is broken and only the state counselor's office seems unaware of this reality," political analyst David Mathieson told AFP, saying that the military has been the "main actor derailing the peace process".

"Since it started, there has been more fighting in my area. People have had to run away. They lose their jobs, their homes. It has brought war on our area."

Myanmar's diverse patchwork of ethnic groups make up around a third of the population, but the government and military have long been dominated by the majority Bamar ethnicity, to which Suu Kyi belongs.

She has been much maligned internationally for a perceived failure to speak up on behalf of the Rohingya but her stance has proved popular domestically.//AFP