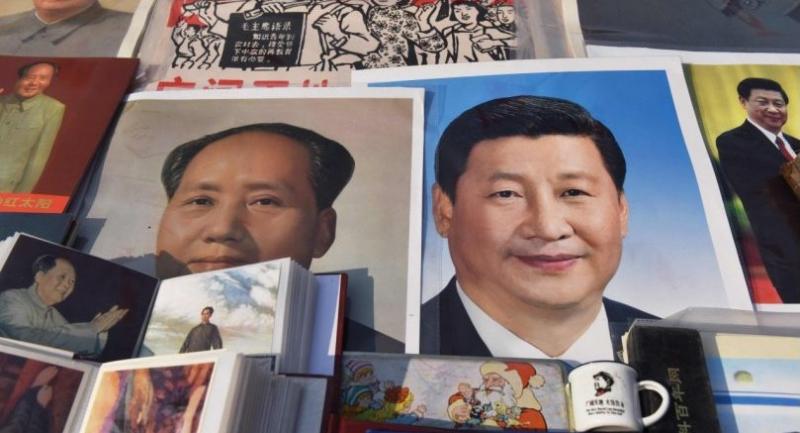 Posters of Chinese President Xi Jinping (R) and late communist leader Mao Zedong are seen at a market in Beijing on February 26.//AFP

Shanghai - Xi Jinping's tightening grip on China had already earned the leader comparisons to Mao Zedong, but they came into even sharper focus after the party paved the way for him to assume the presidency indefinitely.

State media said on Sunday that the ruling Communist Party had proposed abolishing rules limiting leaders to two five-year terms, a guideline imposed in Mao's wake to avoid a repeat of the chaos triggered by his radical political campaigns.

The move could allow the 64-year-old Xi to remain in power for life, ruling as a virtual emperor, and is the latest feather in the cap of a Communist "princeling" who is re-making China in his own image.

Xi, who was given a second term as the party's general secretary at the five-yearly party congress in October, has amassed seemingly unchecked power and a level of officially-stoked adulation unseen since Communist China's founder Mao.

Even though his father Xi Zhongxun -- a renowned revolutionary hero turned vice premier -- was purged by Mao, Xi has remained true to the party that rules with an iron fist and over which he reigns supreme.

Xi is the first Chinese leader to have been born after 1949, when Mao's Communist forces took over following a protracted civil war.

The purging of his father led to years of difficulties for the family, but he nevertheless rose through its ranks.

Beginning as a county-level party secretary in 1969, Xi climbed to the governorship of coastal Fujian province in 1999, then party chief of Zhejiang province in 2002 and eventually Shanghai in 2007.

That same year, he was appointed to the Politburo Standing Committee.

Following Mao's disastrous economic campaigns and the bloody 1966-76 Cultural Revolution, the Communist leadership sought to prevent further chaos by tempering presidential power through a system in which major personnel and policy decisions were hashed out by the ruling Politburo Standing Committee.

The move helped prevent political power from becoming too concentrated in the hands of a single leader but was also blamed for policy indecision that led to growing ills such as worsening pollution, corruption and social unrest.

But "Xi Dada" ("Big Uncle Xi"), as he has been dubbed by Communist propaganda, has broken sharply with that tradition since taking over as president in 2013 and now looms over the country in a deepening cult of personality.

He has used crackdowns on corruption and calls for a revitalised party to become the most powerful Chinese leader in decades.

His face graces the front page of every paper in the country, while his exploits and directives headline each night's evening news.

Shops sell commemorative plates and memorabilia with his image alongside Mao's and he has accumulated so many political and military titles -- from president, to Central Military Commission chairman and party "core" -- that he has earned the nickname "Chairman of Everything".

"We are witnessing the return of the Mao Zedong era, when one single person made decisions for hundreds of millions. There are no checks and balances," said Willy Lam, politics professor at the Chinese University of Hong Kong.

"It is very dangerous, because it's very easy for Xi to make mistakes as nobody will dare oppose him."

The Communist Party's power-broking congress in October confirmed Xi's induction into the leadership pantheon alongside Mao and market reformer Deng Xiaoping by writing his name and political ideology into the party's constitution.

While calling for China's "great rejuvenation" as a world power, the laconic Xi has cultivated a personal image as a man of the people who dresses modestly and buys his own steamed buns at an ordinary shop.

Following a divorce from his first wife, Xi married the celebrity soprano Peng Liyuan in 1987, at a time when she was much more famous than him. The couple's daughter, Xi Mingze, studied at Harvard but stays out of the public eye.

But Xi has presided over a tough crackdown on civil society and freedom of speech that belies the chummy moniker -- and he tolerates no ridicule or slander of his person.

Social media users who have dared to compare his round mien to that of the affable Winnie the Pooh have found their posts quickly deleted, and a man who referred to him as "Steamed Bun Xi" -- a knock at his breakfast publicity stunt -- was jailed for two years.//AFP