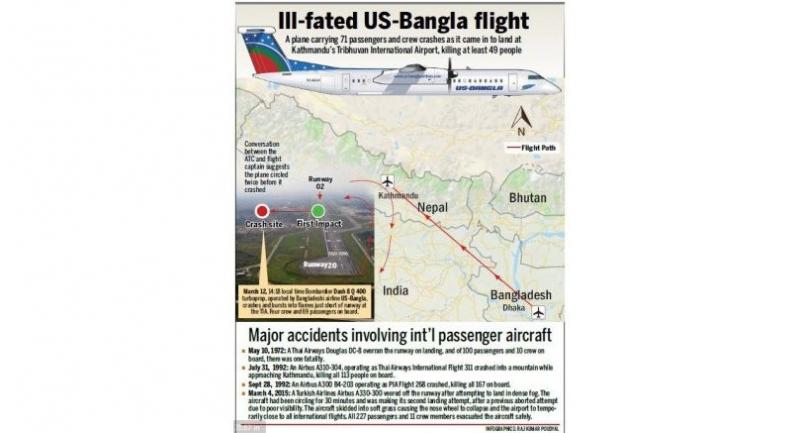 22 including 11 Nepalis survive the horror

Twenty-two people, including 11 Nepalis, survived the crash. They have been admitted to different hospitals, Nepal Police Spokesperson DIG Manoj Neupane said. Of the total passengers, 33 were Nepalis, 32 Bangladeshis, one Chinese and one from the Maldives.

This is the third deadliest crash since the twin aviation disaster in 1992—Thai Airways International in July 31 and Pakistan International Airlines in September 28—crashed into a mountain while attempting to land at TIA, killing all together 280 people aboard.

Air traffic controllers have described Monday’s scene before the crash was “something like a war film”—a complete suicidal attempt that nearly blew the tower. Nepal government has formed a commission to probe the accident.

How did the disaster unfold?

Flight BS 211, piloted  by Abid Sultan, bound from Shahjalal International Airport, Dhaka was permitted to land from the southern side (runway 02) of the Kathmandu’s runway over Koteshwor, but abruptly changed its route and takes a left turn over Jadibuti, proceeding towards the runway 20, the northern-end (Boudha side). A radio conversation between the Flight 211 pilot and the air traffic controller (ATC) tells the pilot was initially warned by the ATC not to proceed to northern-end and asked to hold its usual position.

The pilot replied: “Ok we are making an orbit towards right.” After a few seconds, the pilot again replies, right…holding for runway 02.

The ATC reacts: “That’s good, but do not land. Traffic is not… there is another aircraft on approach.”

At this point ATC clears runway 02 for landing. “At the northern side of the runway, the aircraft had made circle twice before proceeding towards runway 02 to land,” said Sanjiv Gautam, Director General of Caan. “The aircraft flew over Nepal Airlines hanger and nearly touches the ATC control tower,” he said, quoting the ATCs as saying.

The radio conversation is heard, after some silence, the ATC warns, “I say again, turn…!” The alarming sound suggests that the controllers have seen the aircraft quite close to the tower. There is silence for a while. Then the ATC shouts ‘fire’, indicating the crash. The runway is then closed. “The aircraft made a sharp right turn towards from north-west to east over the ATC tower. The aircraft came close to crashing into the control tower while it made the turn. It hit the edge of the runway opposite to the ATC tower, skidded breaking the inner fences of the airport boundary and made an impact at grassland 200 meters away from the runway. The fuel spilled out and immediately caught fire. It took nearly two hours to douse it, the airport authority said. “Rescue officials and firefighters reached the crash site within two minutes,” said Gautam. “In fact, the fast response from the rescue officials saved the lives of many.”

The aircraft did not declare emergency. “And it indicates whether the pilot was disoriented or the aircraft suffered serious malfunction,” said an official of Caan. “While making approach, other aircraft following the Flight 211 had reported to the ATC that the Flight 211 was behaving “abnormal” or it is unstable,” said the official.  The weather and wind condition at the airport was normal, the official said.

However, US-Bangla Airlines Chief Executive Imran Asif has blamed Kathmandu air traffic control for the crash. “There were wrong directions from the tower. Our pilot was not at fault,” he told reporters at his office in Dhaka, the BBC reported.