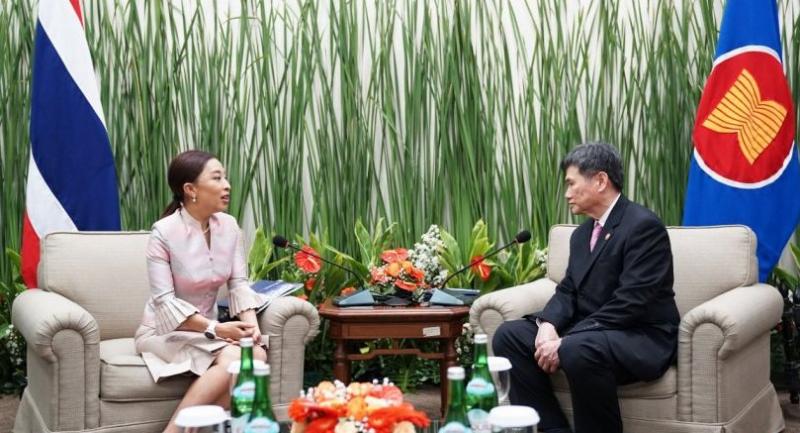 Her Royal Highness Princess Bajrakitiyabha on Monday visited the Asean Secretariat in Jakarta and hold a discussion with Asean’s Secretary General Lim Jock Hoi, according to Asean Secretariat's statement.

She was visiting Jakarta as the United Nations Office on Drugs and Crime (UNODC) Goodwill Ambassador for the Rule of Law in Southeast Asia, a role she assumed since February 2017.

The Princess was welcomed at Asean Secretariat by Lim, the Deputy Secretaries General of Asean, the Thai Ambassadors to Indonesia and Asean, as well as the Chair and members of the Committee of Permanent Representatives to Asean, read the statement.

She was accompanied by a delegation of Thai diplomats and officials from the UNODC and Thailand Institute of Justice.

During their meeting, Lim congratulated the Princess on her appointment as UNODC Goodwill Ambassador and commended her leadership in promoting the rule of law and development in the region through various initiatives including a high-level conference convened in Bangkok on sustainable development, crime prevention and safe societies for Southeast Asia.

Both sides exchanged views on issues related to criminal justice, legal reforms and governance and empowerment of vulnerable groups as they are operationalised by Asean sectoral bodies and cross-sectoral mechanisms.

Her Royal Highness expressed appreciation for the comprehensive briefing and stated that further cooperation could be strengthened, with the involvement of as many stakeholders as possible.

Before the meeting, the Princess toured the Asean Gallery to view the Asean Secretariat’s collection of art works donated by heads of states and governments particularly those from Thailand.

Her Royal Highness has served for a number of years in the Office of the Attorney General of Thailand. She also serves as the Chairperson of the Special Advisory Board of the Thailand Institute of Justice and was Thailand’s Ambassador to Austria and Permanent Representative of Thailand to the United Nations at Vienna in 2012-2014.  She studied criminal law and received a Doctor of Juridical Science (J.S.D.) Degree from Cornell University.