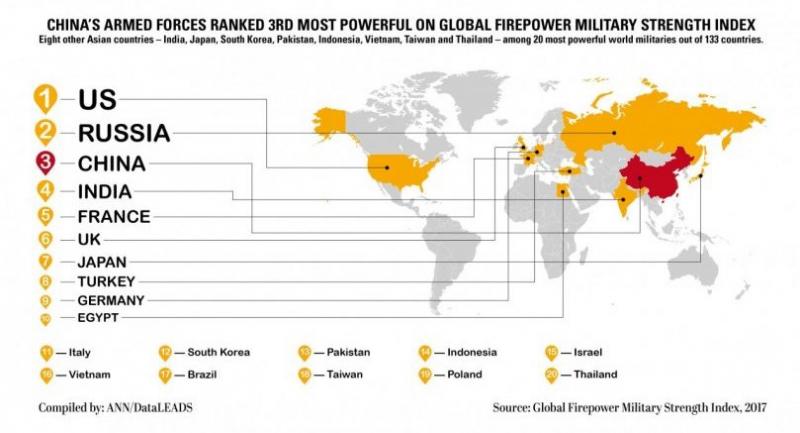 China and eight other Asian countries – Japan, South Korea, Pakistan, Indonesia, Vietnam, Taiwan and Thailand- among 20 most powerful world militaries out of 133 countries.

The Global Firepower Military Strength Index measures the countries’ military strength based on 50 parameters, including military resources, diversity of weapon systems, natural resources, industry and geographical features and available manpower.  It rates countries according to these factors with 0.0000 being perfect rating.

China’s armed forces have been ranked 3rd out of a list of 133 countries based on their capability on land, sea and air, as well as their financial dexterity and diversity of weapon systems. It has more aircraft and naval ships than Russia but is hugely outnumbered in total tanks in service. China’s Armed Forces have scored 0.0945 and it is preceded by Russia and the USA.

While USA has the strongest army in the world with the cutting edge technology and extremely well trained human force, China leads in the Asian region. China has made fast strides in modernising military programmes and it also has the longest standing army in the world. The country upped its military budget this year to better equip its army. Currently it possesses second largest tank fleet and second largest submarine fleet in the world.

India has managed to maintain its position among the top five military powers in the world on the GFP list. India leads China in terms of total armed personnel with  4,207,250 personnel against China’s 3,712,500. China, however, leads in terms of active personnel with 2,260,000 troops compared to India’s 1,362,500.

Both China and India are nuclear power. However the index didn’t count nuclear stockpiles for the ranking but gave points for nuclear capability.

Japan is ranked seventh globally out of 133 countries and rated 0.2137. Although Japanese military is small it possesses advanced weapon systems. With a sustainable defense budget the country has strengthened air power, navy power and military man power.

South Korea is ranked 12th in the world with a rating of 0.2741. The country has been facing a potential threat of aggression from North Korea and has been increasing its military strength on various fronts.

Pakistan is ranked 13 globally and maintains a rating of 0.3287. The country has 301 fighter aircraft, 394 attack aircraft, and 316 helicopters, 52 of those which are attack choppers. Added to its basket of weapons is the access to nuclear weapons that makes it a formidable force.