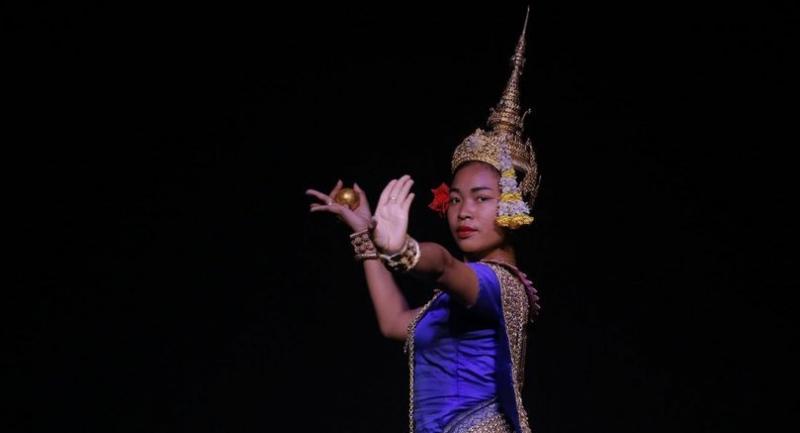 Lead image: Chamroeun Nivorleak dances the Moni Mekhala as part of a rehearsal for Earth and Sky, a new show from Cambodian Living Arts.//HENG CHIVOAN

Voan Savay, the legendary former prima ballerina of the Cambodian Royal Ballet, keeps her eyes glued to the young dancer rehearsing on the stage. After two months of preparation, this is one of the final dress rehearsals for a brand new production from Cambodian Living Arts, and the show is finally coming together.

From the front row of the theatre at the National Museum, Savay shouts instructions to the young woman and claps along with the beat of the music, illustrating which rhythms to emphasise. One can’t help but wonder if the dancer on stage knows what big shoes she’s been tasked with filling. In a brief pause in the rehearsal while the technicians adjust the lighting Savay turns around in her seat and pulls up a photograph of herself from 1969, a golden era for ballet in the country. The image shows an 18-year-old ballerina in her prime, performing the Moni Mekhala, the very same dance being readied in front of her.

The music starts up again, and the young dancer on the stage resumes her run-through.

The performance these dancers are working towards will hold its official premiere just after Khmer New Year, and showcases classical ballet, traditional folk dancing and storytelling, all linked by one cohesive narrative.

On the stage, the cast seamlessly weaves together scenes of rural life with traditional works like the Moni Mekhala and various animal dances. The dancers perform each of these numbers with truly infectious joy – the monkeys frolic rambunctiously, the peacocks preen, the goddesses float across the stage, and when the villagers dance and play it’s impossible to resist swaying in your seat and clapping along.

But, for all the show’s artistic merit, which it has in spades, some of the most innovative aspects of this production take place offstage and out of view of the audience. Behind the scenes, Cambodian Living Arts is attempting to create a new model for cultivating and sustaining the arts and artists in this country.

It’s an effort that is requiring these young artists, and the people like Savay working behind the scenes to support them, to take these heavenly, ethereal artforms and bring them pragmatically crashing down to earth – by teaching ballerinas how to budget, and walking dancers through the intricate steps of contract negotiation.

The cast of this new performance was put together over the course of several rounds of auditions in January. More than 70 artists tried out and 30 were picked to participate in a new group that CLA is unofficially calling the “incubator troupe”.

These performers will remain in the program for two years, and during that time they will be getting much more than artistic guidance and training. In all-day sessions held once per month, CLA will also be teaching them the hard skills needed to make a living from their craft – skills like budgeting, contract negotiation, networking and team-building – making the incubator project a sort of business school for artists.

Jean-Baptiste Phou, the head of creative programs at Cambodian Living Arts, said that to him and others involved in the incubator, this approach just makes sense – while people often talk about valuing the arts, they think less about what it takes for artists to get by. And, he said, we also don’t properly teach our artists to know their own worth.

“I think it’s important because we value arts and artists and need them to value themselves,” he said. “They need to make a living.”

The hope is that by giving these artists the tools to sustain themselves, the arts they practice can live on as well.

“It’s not just about preservation,” said Yon Sokhorn, who manages the artistic and professional training the incubator artists will receive, “but preservation stands shoulder to shoulder with artistic development”.

Everyone involved in this project, from Savay down to the individual dancers and actors, speaks of their work protecting these artforms as a sort of calling.

“As a Cambodian, I am very happy to know my own culture and to be able to perform it on stage,” said Somkhoun Sayavuk, 25, a member of the incubator troupe, who said that even from a young age he knew that he wanted to protect and preserve the artistic traditions of this country.

“I want to show Cambodian people from all generations about the richness of our culture,” he said.

For many artists working today, however, that calling to make and protect art comes with an increasingly difficult life. Savay is no stranger to struggling for her art, but even she thinks that the obstacles facing this current generation of artists are daunting.

During the Khmer Rouge period, when Savay’s family was evicted from Phnom Penh in 1975, she hid the fact that she was a dancer in order to survive. She later returned to the city after the fall of the Khmer Rouge and took up dancing once again, only to be forced from her home by political instability for a second time in 1981. She settled in refugee camps along the Thai border with her husband, a fellow artist, but even then she didn’t let her circumstances keep her from her devotion to ballet. During the 10 years Savay spent in the camps she established a dance school and taught dozens of Cambodian children, many of whom grew up to be artists in their own right. One of Savay’s students from that time now lends her voice to the music for the CLA performance.

But, despite all of the twists and turns of Savay’s life, she still maintains she has been luckier in her career than most of the dancers working today. She admits that she doesn’t know how most young artists survive on the low amounts of money they are able to earn from their hard work, and she laments the fact that financial concerns force many of them to work in places she sees as beneath their lofty craft – like hotel lobbies and restaurants. In her opinion, performing classical dance in these locations cheapens the artform.

Savay also noted that younger artists aren’t just up against financial difficulty but also disinterest from the Khmer public, something that wasn’t the case in her time performing. In her day, she said, a Royal Ballet performance would attract streams of people from the provinces to the capital, often camping out just to get the chance to see the company’s storied ballerinas perform. Now, a show is a success if it can get even a handful of locals to attend.

Her contributions today are perhaps more humble but arguably longer lasting than in her youth.

“Before I thought of dancing as a way to show off and to get the love from my parents and my friends,” Savay said. “However, right now, I see it as a life mission until the day I die.”

The premiere takes place on April 19 at 7pm, on the grounds of the National Museum of Cambodia. It will then be on stage six nights per week, at 7pm from Monday to Saturday for the foreseeable future.