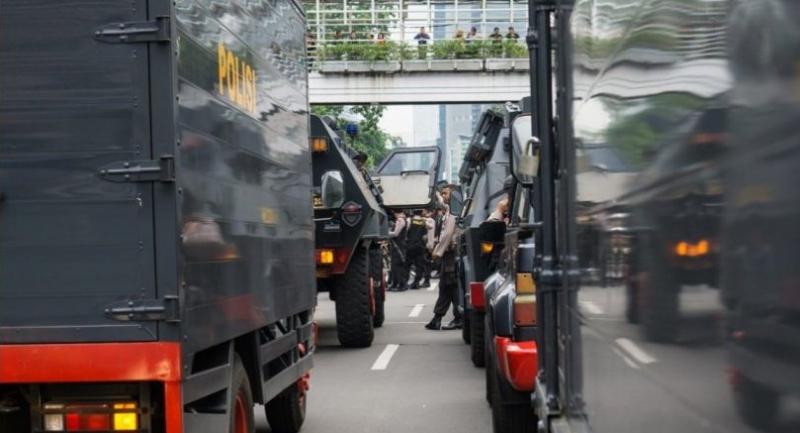 On alert: On Jan 14, 2016, Jakarta was rocked by multiple explosions, including one at a police post, and a subsequent gunfight in front of Sarinah between police and multiple assailants. (Shutterstock.com/ardiwebs )

Motorists In Jakarta have complained about unusual traffic congestion around Jl. Sudirman and Jl. M.H. Thamrin, Central Jakarta, over the past two weekends, which was caused by the shooting of a counterterrorism film spearheaded by the National Police.

The film crew behind 22 Minutes, which is reportedly inspired by the Thamrin attack two years ago, has been shooting scenes involving critical explosions and a shoot-out at the intersection in front of Sarinah department store since April 14.

To secure the area, the Jakarta Police closed Jl. M.H. Thamrin from 11 a.m. to 4 p.m. on Saturday and Sunday. The closure will continue until filming is completed on May 6.

Ghoida Rahmah, 24, a resident of Rawa Belong, West Jakarta, said she was trapped in traffic for about two hours traveling to Akmani Hotel on Jl. KH. Wahid Hasyim in Menteng, Central Jakarta, despite taking an ojek (motorcycle taxi).

The congestion started from the Tanah Abang overpass in Central Jakarta, she added. She had tried to take a shortcut through Jl. Kampung Bali and Jl. Kebon Kacang Raya to avoid the traffic jam, but to no avail.

“I was annoyed by the traffic diversion. I understand that the police want to make a movie, but they should film it early in the morning, not when the streets are crowded,” Ghoida told The Jakarta Post on Sunday, adding that the street closure should have been announced much earlier.

Putri Marcellia, 24, a resident of Bekasi, West Java, did not know about the traffic diversion.

Driving her own car, she spent about an hour on Jl. Sudirman to get to Grand Indonesia mall last Saturday. She thought the traffic jam had been due the capital’s ongoing MRT construction.

She said the police should have filmed the movie on Sunday morning during Car Free Day to avoid causing traffic.

“We wanted to show the real conditions of the scene [during the actual attack]. On behalf of the movie producer, I want to apologize [for the traffic jam],” Setyo said.

The movie, which is directed by Eugene Panji and Myrna Paramita, is part of the police’s counterterrorism campaign, he added.

It features actor Ario Bayu and is being financed by the Corporate Social Responsibility (CSR) program of a company, Setyo said, without revealing its name.

On Jan. 14, 2016, Jakarta was rocked by multiple explosions, including one at a police post, and a subsequent gunfight in front of Sarinah between police and multiple assailants.

At least eight people, including four terrorists, were killed. Twenty-six others, including police officers, were injured.

National Police chief Gen. Tito Karnavian, who led the Jakarta Police at the time, was lauded for the force’s swift actions.

Aman Abdurrahman, the alleged mastermind of the attack, has been tried at the South Jakarta District Court.

According to the prosecutors’ indictment, Aman had been inspired by the Paris terror attack in November 2015.

A month after the incident, Aman reportedly ordered four people to carry out a similar assault on Jl. Sabang, Central Jakarta, an area popular among foreigners. However, the plan changed when the perpetrators instead bombed Starbucks cafe and a police post.