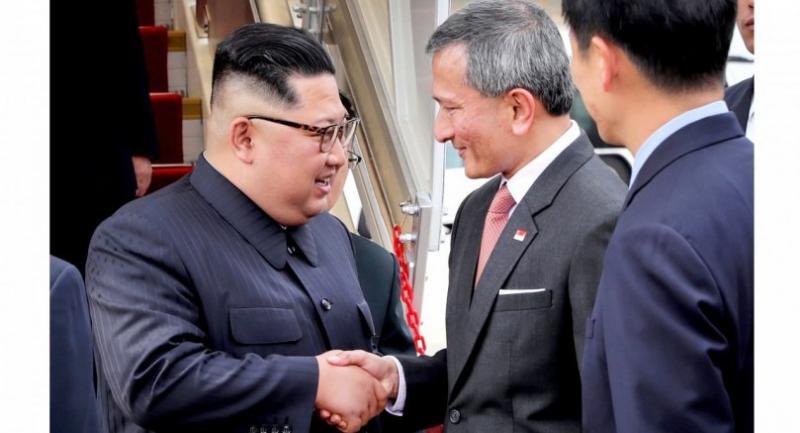 North Korea's capacity for distraction and sleight of hand was on show Sunday as leader Kim Jong Un flew to Singapore for his summit with US President Donald Trump.

One of them was the ageing Soviet-made Ilyushin-62 that is Kim's personal jet -- officially known as "Chammae-1", or Goshawk-1, after the North's national bird but perhaps more memorably dubbed "Air Force Un".

But while Singapore is well within its range, questions have been raised about its reliability and Kim, it turned out, was not on board.

Instead he flew on an Air China Boeing 747. According to flight tracking website Flightradar24, it took off using flight number CA122, a standard designation for the airline's route from Pyongyang to Beijing.

In midair it changed its callsign to CA061 and headed south.

In Singapore its high-profile passenger was met by Foreign Minister Vivian Balakrishnan, who tweeted a picture of himself shaking hands with Kim, who wore a dark lapel-less suit. A handout photo made available by the Ministry of Communications and Information of Singapore shows North Korean leader Kim Jong-un (C) as he arrives at Changi Airport in Singapore, 10 June 2018.

Kim was driven into the city-state in a convoy of more than 20 vehicles, including an ambulance, with North Korean television cameramen filming his progress through the sunroofs.

Hundreds of Singaporeans lined the streets to capture images of their own of his black Mercedes Benz stretch limousine with tinted windows -- not normally allowed in Singapore, even for the country's prime minister. Journalists and onlookers watch the motorcade carrying North Koran leader Kim Jong Un (not pictured) arriving at the St. Regis hotel ahead of the US-North Korea summit in Singapore on June 10, 2018. // AFP PHOTO

Reporters and photographers packed the pavements outside the St Regis hotel where Kim was to stay. Covers had been hung over the driveway and hotel security brought out additional potted plants to obstruct the view of the lobby.

Aside from three official photographs released by the Singapore government, there had been no public sighting of Kim nearly two hours after he landed.

Located just off Singapore's diplomatic district and a stone's throw away from the Orchard Road shopping belt, the modernist St Regis is tucked between an ageing building dotted with carpet shops and a sleepy high-end neighbourhood mall. Singapore police patrol along the perimeter of the St Regis hotel, where North Korean leader Kim Jong-un will stay, ahead of his expected arrival, in Singapore, 10 June 2018. // EPA-EFE PHOTO

Its rooms are "lined with gold, and accented with precious metals like brass, onyx and silver", the hotel says on its website.

It does not give prices but the list price of a similar facility in New York is $35,000 a night.

Who will pick up the bill for the North Koreans' stay has been the subject of much speculation -- the North's economy has suffered from years of mismanagement and is now subject to multiple sanctions over its nuclear ambitions.

Pyongyang has a history of trying to have others pay for its travel -- Seoul paid for its delegates to this year's Winter Olympics in the South.

But a Seoul presidential spokesman said it was "not considering it at all at the moment", while the US has insisted it will not foot the bill -- and is not asking anyone else to do so. A handout photo made available by the Ministry of Communications and Information of Singapore shows North Korean leader Kim Jong-un (2-L) is welcomed by Singapore's Foreign Minister Vivian Balakrishnan (3-R) upon his arrival at Changi Airport in Singapore, 10 June 2018.

Singaporean Prime Minister Lee Hsien Loong said Sunday his government was spending around Sg$20 million to host the summit, around half of it on security.

"It's a cost that we are willing to pay. It's our contribution to an international endeavour which is in our profound interests," he said.

He did not mention the North Koreans' hotel bill.