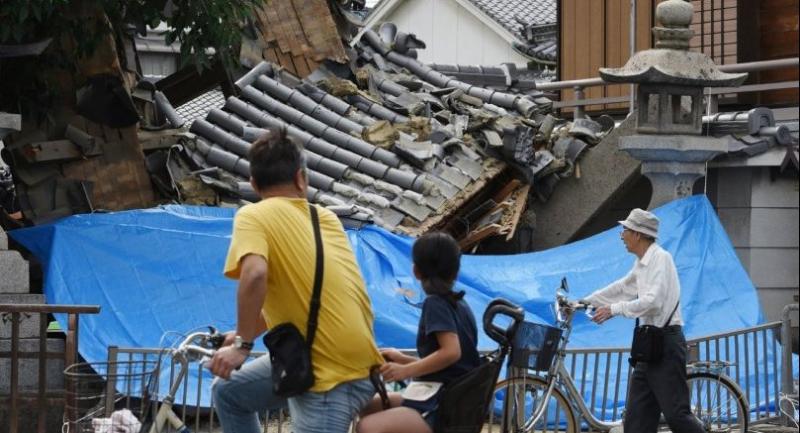 People pause to look at a collapsed house following an earthquake in Ibaraki City, north of Osaka prefecture on June 18.//AFP

No Thais are believed to be killed or injured by the strong earthquake that hit Japan’s Osaka city on Monday morning, according to the Thai Foreign Ministry.

The ministry based its report on a report from the Thai consul general in Osaka.

The 5.8-magnitude quake hit Osaka at 7.58am local time, the height of rush hour in the city of around 2 million people. The shaking lasted about 20 seconds. The tremor’s centre was in Kyoto prefecture.

Local media reported that three people were killed in the quake in Osaka, including a nineyearold girl. Public broadcaster NHK said an 80-year-old man had been killed by a collapsing wall and another man trapped under a bookcase in his home. In addition to the three deaths, the government’s Fire and Disaster Management Agency said at least 91 people were injured.

Meanwhile, Thai International Airways reported that about 100 passengers of its TG 673 flight were unable to check in on time to board the flight following the quake, after transportation services were suspended in Osaka.

The airline facilitated the group by providing them a replacement afternoon flight without charging additional fees.

Any passengers needing help could contact the airline’s branch office at 0970064015.

Meanwhile the Facebook page “Thai Students’ Association in Japan under the Royal Patronage” has issued a warning for Thais in Japan about possible aftershocks in the following days. The post advised people to be well prepared with water, food and other necessities, to avoid sleeping near shelves and to identify the locations of shelters near their places.

However, there was no largescale destruction and no tsunami warning issued after the earthquake, although commuters were stranded and tens of thousands were left without power.

And government spokesman Yoshihide Suga cautioned that “there is a possibility that strong aftershocks will happen”.

“Largescale quakes are likely to happen in the next two to three days,” he told reporters.

Japan sits on the socalled Pacific “Ring of Fire” where a large proportion of the world’s earthquakes and volcanic eruptions are recorded.

On March 11, 2011 a devastating magnitude 9.0 quake struck under the Pacific Ocean, and the resulting tsunami caused widespread damage and claimed thousands of lives.

It also sent three reactors into meltdown at the Fukushima nuclear plant, causing Japan’s worst postwar disaster and the most serious nuclear accident since the Ukraine’s Chernobyl in 1986.