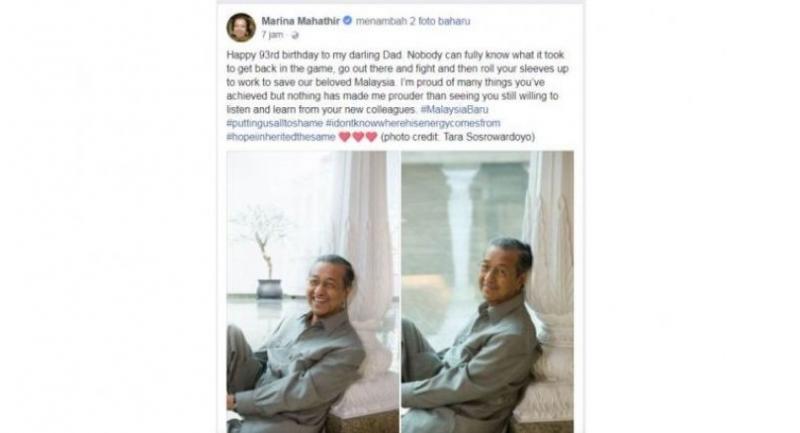 By The Nation
Asia News Network

"Nobody can fully know what it took to get back in the game, go out there and fight and then roll your sleeves up to work to save our beloved Malaysia.

"I'm proud of many things you've achieved but nothing has made me prouder than seeing you still willing to listen and learn from your new colleagues," she added.

Marina ended the note with several tongue-in-cheek hashtags that echoed Malaysian's awe over the nonagenarian's stamina and tenacity, including "#puttingusalltoshame" and "#ihopeiinheritedthesame".

However, even the doting daughter does not know what is Dr Mahathir's secret fountain of youth as she wrote "#idontknowwherehisenergycomesfrom".

While Dr Mahathir has dismissed rumours that he goes for stem cell therapy, he is a firm believer in staying active and leading a healthy lifestyle.

"I would prefer to rest, of course, but I would like to advise people not to rest when they grow old," he told Bernama on Monday (July 9) when queried during a recent trip to Tokyo on how he remained healthy.

Dr Mahathir, who has the distinction of being the oldest Prime Minister in the world, explained that muscles would deteriorate if they were not used.

"If you lie down all the time, the muscles (eventually) cannot even carry your weight, you cannot stand, you cannot walk. So it's not good when you are old (that) you just lie down and do nothing," he said, pointing out that it was the same with one's brain.

"If you don't use your brain, you don't think, you don't solve problems, you don't read, you don't write, the brain regresses and you become senile...so always be active," said Dr Mahathir who was born on July 10, 1925.