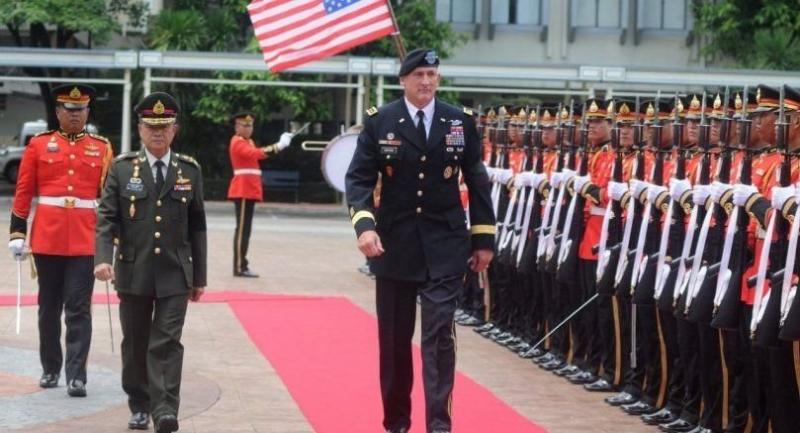 THAILAND’S 20-year strategy will become obsolete once the US implements its new Indo-Pacific strategy and expands its role across the two oceans, notably on security matters, two prominent Thai scholars on security and military affairs said.

The national strategy on security approved by the National Legislative Assembly last month was unclear about how to deal with the new US strategy, said Chulalongkorn University security expert Surachart Bamrungsuk. While US President Donald Trump’s strategy expands US power to cover the two oceans from Australia to India and perhaps east of Africa, the Thai strategy merely says the country would balance and engage all countries, notably the superpowers.

The junta’s strategy looks to the US as the main actor and attaches importance to BRICS – Brazil, Russia, India, China and South Africa – while also dealing from a security standpoint with the Islamic State (IS) terrorist organisation, he said. “We all known the US is there and security is important, but BRICS and IS are not relevant anymore,” he said.

Thailand needs to adjust its grand strategy to cope with new changes in global geopolitics, otherwise the country could lose its position in the international community, he said.

The position on leaning towards China is not a strategy, but more a reaction to the criticism by the Barack Obama administration after Prayut’s coup in 2014.

Thailand and the US have moved closer during Trump’s tenure. Prayut was welcomed to the White House in Washington and military-to-military ties have edged closer.

“I understand that Washington might be worried about the close ties between Thailand and China,” Surachart said. “It seems Thailand is now a part of China’s Belt and Road Initiative.” The military government is now the link between Thailand’s geography and China’s strategy, he said. “We have seen a strong push to build the Kra Isthmus Canal to complete China’s strategy of linking the Pacific and Indian oceans.”

Surachart said Washington needs to readjust its policy to push Thailand back to full democracy. “Of course, military-to-military engagement is necessary, and joint military exercises – bilateral or multilateral such as the Cobra Gold – should continue. But giving a red-carpet welcome to the leader of a military government is the wrong signal,” he said.

Piyaphob Mahamad, a military affairs expert from Rajabhat Rajanagarindra University, said Thailand was continuing to do a great job in nurturing relations with the US despite the increasing influence of China in both the country and the region. As full military exercises have resumed, high-ranking military officers from the US, in particular Joseph Dunford, have visited the country and chaired meetings of the chiefs of staff, he said. Dunford insisted that relations remained strong, as they have been since after World War II, said Piyaphob.

While Thailand – as a smaller country – seems to benefit from the military exercises, Piyaphob pointed out that there were many things in it for the US, too. Thailand’s varied terrain is great for war drills and is largely unmatched by other countries.

The Thai Army, however, has looked east in recent years, purchasing more weapons from China as it was cost effective. This has led to speculation about possible bigger and more frequent military exercises with China as well.

But Piyaphob said they could not match the multilateral US military exercises led by the US, while drills with China drills were significantly smaller and bilateral.

There could be increased procurement of Chinese hardware, he said, but opaque deals would make it hard to know how much had been spent from the Thai defence budget.

“Unlike procurement from the US, we would never know the real price of Chinese hardware,” he said. “More importantly, if we purchase more Chinese equipment till it dominates the weapon systems, I think the Thai military would need to change its defence doctrine to match the weapon systems being used,” he said.