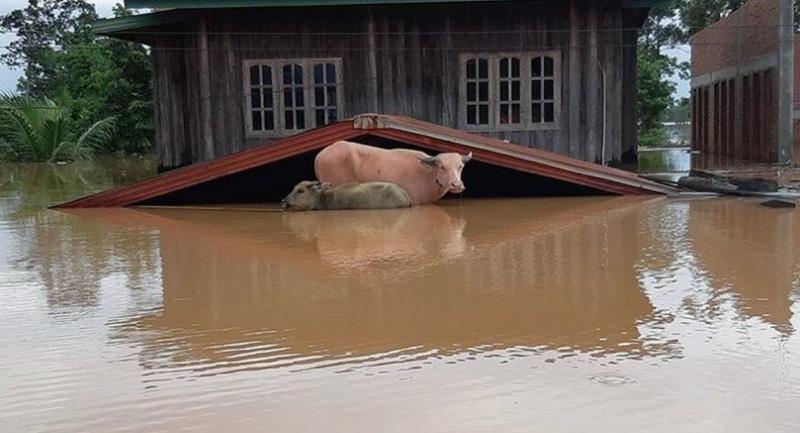 Attapeu , Laos - Rescuers battled fresh rains Thursday to reach scores of people still missing after a dam collapse in southern Laos that unleashed a torrent of water, washing away whole villages and killing at least 26 people.

The search for survivors has been hampered by monsoon weather in the remote southern corner of Laos where the Xe-Namnoy dam collapsed on Monday.

Panicked residents took flight, taking refuge on rooftops or making their way to evacuation centres where some said they were given just a few hours' warning of the looming disaster.

Boats and helicopters were dispatched to find people still trapped by the widespread flooding that has left at least 131 missing, with road access cut completely in many areas.

Vietnam dispatched military and medical personnel to support rescue efforts and Thailand said it was sending close to $150,000 in aid.

Around a dozen Chinese rescuers in helmets and life jackets joined rescuers in Sanamxai town Thursday near the dam site, according to an AFP reporter at the scene.

State media said more than 3,000 people were left homeless by the deluge, many squeezing into makeshift shelters where they recounted the terrifying scramble to escape the swirling brown floodwaters.

Tran Van Bien, 47, from Ban May village near the dam collapse said he was told to evacuate just two hours before the dam burst on Monday evening, running to a neighbour's house with his family as his home quickly filled with water.

"We were on the roof of that house the whole night, cold and scared. At 4:00 am a wooden boat passed and we decided to send my wife and my kid out," he told AFP from a nearby village where he eventually found dry land.

"My wife tied our child to her body, saying if they died, they would die together rather than being alone."

The $1.2 billion dollar Xe-Namnoy dam, a joint venture between Laos and Korean companies, was still under construction in southern Attepeu province when it collapsed after heavy rains pounded the area earlier this week.

However a timeline from operator Korea Western Power Co. obtained by AFP said 11 centimetres of subsidence was spotted at the dam's centre as early as Friday.

"It remains unclear what caused the dam to subside in some places and develop cracks. But all of these happened under heavy rains," a Korea Western Power spokesman told AFP.

The 410 MW project is one of more than 50 hydropower plans underway in Laos, which has billed itself as the "Battery of Asia" in its ambitious bid to become a major power exporter in the region.

It has said it wants to double its power generation capacity to 28,000 MW by 2020 and has opened its doors to foreign investors -- mainly from China, Thailand and Vietnam -- to build dams on its vast river network.

But the projects have come under fire by rights groups who say local communities are forcibly displaced and lose key access to river waters for farming and fishing.

"Many of the people affected by the current dam collapse have already suffered other impacts due to dam construction. This tragedy has compounded their suffering," International Rivers said in a statement Thursday.

"Communities were not given sufficient advanced warning to ensure their safety and that of their families. This event raises major questions about dam standards and dam safety in Laos."//AFP