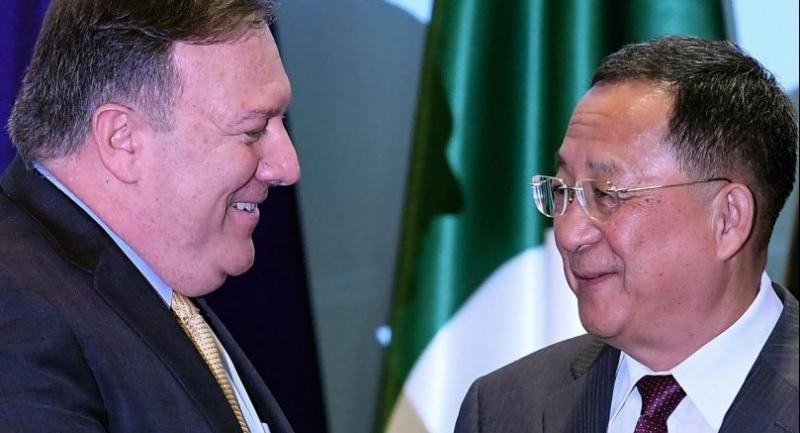 North Korea on Saturday turned its ire on the United States, slamming Washington for “extremely inappropriate moves… of putting pressure on other countries” during the 25th Asean Regional Forum in Singapore.

North Korean Foreign Minister Ri Yong Ho attacked the US for “raising its voice louder to maintain sanctions against the DPRK and not showing an attitude to even declare an end to the war, a very basic and primary step for peace on the Korean Peninsula,” a five-page statement of Ri’s remarks to the forum said.

“[The US presses countries] not to send high-level delegations to mark the 70th anniversary of the founding of the DPRK in September this year,” it quoted Ri as saying.

North Korea warned that “there will be no case whereby [it] will move forward first unilaterally” if the US does not show in practice its strong will to remove its concerns.

Ri also reiterated that the only practical way to move forward was to take a new approach of giving priority to confidence-building measures and implementing all items in the joint statement issued after the summit of Donald Trump and Kim Jung-un in Singapore in a “balanced, simultaneous and phased way”.

“The DPRK-US Joint Statement should not be permitted to fall prey to American internal politics, inviting an adverse wind at odds with the intentions of the leaders,” the statement said.

Ri’s remarks came as US Secretary of State Mike Pompeo continued to call on regional countries to press sanctions against the totalitarian regime despite calmer waters in the peninsula following the Trump-Kim Summit in June.

Pompeo also targeted Russia, citing a report on a Russian joint venture with a North Korean firm and the granting of new work permits to North Korean gas workers.

“If this report proves accurate, and we have every reason to believe that it is, that would be in violation of UNSC [UN Security Council] resolution 2375. I remind every nation of its importance because this is a serious issue,” Pompeo told the press on Saturday.

“We expect Russia and all countries to abide by the UNSC resolutions and enforce sanctions on North Korea. Any violations that distract from the world’s goal of final denuclearisation of North Korea would be something that America would take very seriously,” he added

China, one of North Korea’s friendliest nations, was positive about setting up a peace mechanism over the peninsula, without affecting the sanctions.

“The Korean nuclear issue has been brought back on track to seek a peaceful settlement through dialogue and consultation. This has been a long-standing proposition of the Chinese side and also the direction China has been committed to,” China’s Foreign Minister Wang Yi said on Saturday.