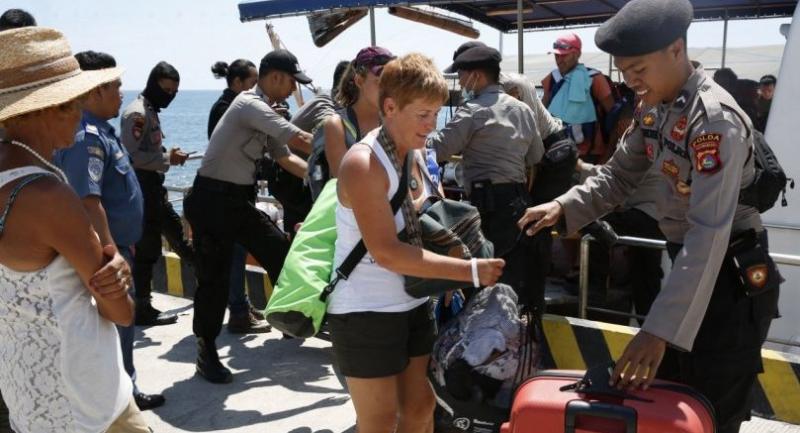 Foreign tourists carry their belongings as they disembark from a boat after an earthquake struck northern Lombok, West Nusa Tenggara, Indonesia on August 7.//EPA-EFE

Mataram, Indonesia - Terrified holidaymakers rushed for boats and planes to leave Indonesia's Lombok island Tuesday after it suffered a second deadly quake within a week, while rescuers struggled to reach hard-hit areas where survivors are in urgent need of food and shelter.

The shallow 6.9-magnitude quake killed at least 98 people and destroyed thousands of buildings in Lombok on Sunday, just days after another deadly tremor surged through the holiday island and killed 17.

Rescuers on Tuesday resumed the search for survivors, and to recover the bodies of victims in the rubble of houses, mosques and schools destroyed in the latest disaster.

More than 20,000 people are believed to have been made homeless on Lombok, with 236 severely injured, and authorities have appealed for more medical personnel and basic supplies.

Emergency crews were Tuesday working through the wreckage of a collapsed mosque in the northern village of Lading-Lading, where authorities fear a number of people are trapped.

At least one body has been recovered from the rubble of the mosque, which was reduced to a pile of concrete and metal bars, with its towering green dome folded in on itself.

Some 4,600 tourists have been evacuated from the Gili Islands, three tiny, coral-fringed tropical islands that lie off the northwest coast of Lombok and are popular with backpackers and divers.

Hundreds crowded onto its powder-white beaches on Monday, desperately awaiting transport off the normally paradise destination. Seven Indonesian holidaymakers died on the largest of the three, Gili Trawangan.

Margret Helgadottir, a holidaymaker from Iceland, described people screaming as the roof of her hotel on one of the islands collapsed.

"We just froze: thankfully we were outside," she told AFP tearfully from a harbour in Lombok to where she had been evacuated. "Everything went black, it was terrible."

Hundreds of weary tourists continued to arrive with their baggage at Bangsal harbour, the main link between Lombok and the Gilis, on Tuesday.

Some said they felt stranded and complained about a lack of coordination and affordable transport to the tourist hub of Senggigi or Lombok's airport, where dozens slept on the floor overnight awaiting flights out.

"There's a massive rush of people wanting to get out of Lombok because of unfounded rumours, such as of a tsunami," Muhammad Faozal, the head of the tourism agency in West Nusa Tenggara province, told AFP.

"We can help tourists to get to the airport but of course we can't buy them tickets for free," he said, adding that authorities were providing free accommodation, food and transport to those in need.

Lombok airport's general manager said airlines had been laying on extra flights since Monday and that his staff had been providing stranded passengers with blankets and snacks.

"We have been doing our best to manage the tourists flocking the airport," he told AFP. "We are doing our best so we can fly out as many as possible."

Immigration authorities said that seven foreigners -- from Belgium, Britain, Czech Republic, Denmark, France, South Korea and the United States -- were injured in the quake and are being treated in hospital.

Sunday's shallow tremor sent thousands of residents and tourists scrambling outdoors in Lombok, where many spent the night as strong aftershocks including one of 5.3-magnitude rattled the island.

The quake knocked out power in many areas and parts of the island and remained without electricity on Tuesday.

A lack of heavy equipment and shattered roads have hampered efforts to reach survivors in the mountainous north and east of the island, which had been hardest hit.

Najmul Akhyar, the head of North Lombok district, estimated that 80 percent of that region was damaged by the quake.

Hundreds of bloodied and bandaged victims have been treated outside damaged hospitals in the main city of Mataram and other badly affected areas.

Patients lay on beds under wards set up in tents, surrounded by drip stands and monitors, as doctors in blue scrubs attended to them.

"What we really need now are paramedics, we are short-staffed. We also need medications," Supriadi, a spokesman for Mataram general hospital, told AFP on Monday.

Indonesia, one of the world's most disaster-prone nations, straddles the so-called Pacific "Ring of Fire", where tectonic plates collide and many of the world's volcanic eruptions and earthquakes occur.

In 2014, a devastating tsunami triggered by a magnitude 9.3 undersea earthquake off the coast of Sumatra in western Indonesia killed 220,000 people in countries around the Indian Ocean, including 168,000 in Indonesia.