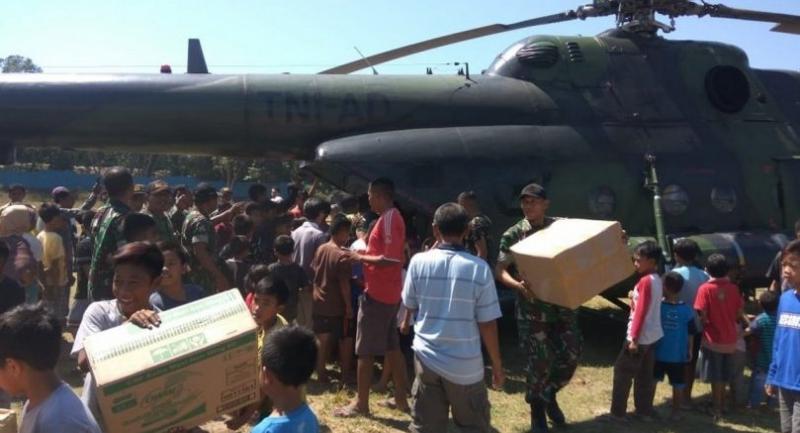 Photo shows military personnel distributing supplies to residents in Mataram on Indonesia's Lombok island on August 20, 2018 after a series of earthquakes were recorded by seismologists throughout August 19.//AFP

Mataram, Indonesia - A series of powerful earthquakes have rocked the Indonesian holiday island of Lombok, killing at least 10 people and setting off fresh waves of panic after nearly 500 died there following a huge tremor two weeks ago.

The quakes hit throughout Sunday, with the first measuring 6.3 shortly before midday which triggered landslides and sent people fleeing for cover as parts of the island suffered blackouts.

It was followed nearly 12 hours later by a quake measuring 6.9 magnitude and a string of powerful aftershocks.

The picturesque island next to holiday hotspot Bali was already reeling from two deadly quakes on July 29 and August 5 that left hundreds of thousands homeless.

Ten people were killed in the quake Sunday evening, mostly by falling debris, with four deaths in eastern Lombok and six on the neighbouring island of Sumbawa, according to the national disaster agency.

Some two dozen people were injured and more than 150 homes and places of worship were damaged, the agency said.

"When the earthquake happened most people were outside their homes or at shelters so there have not been that many fatalities" compared to the August 5 tremor, said national disaster agency spokesman Sutopo Purwo Nugroho.

"The trauma because of the earlier quake on Sunday (morning) made people prefer to stay outside," he added.

Officials have evacuated some patients from a hospital in Sumbawa island and in Lombok's capital Mataram for fear of worse destruction.

Blackouts have hit much of Lombok, according to Sutopo, who posted pictures of cracked roads and video footage of a large fire that broke out in a village on Sumbawa.

"I'm too scared to stay at my house because it's damaged," said Lombok resident Saruniwati, who like many Indonesians goes by one name.

"I've been here since the quake (earlier this month). I went home two days ago and now I'm back here again."

"The earthquake was incredibly strong. Everything was shaking," he told AFP.

"Everyone ran into the street screaming and crying."

A dozen foreign guests at the hotel Lina Senggigi, which is in a popular tourist spot, were ushered out of the building as the quake struck.

There were landslides in a national park on Mount Rinjani where hundreds of hikers had been briefly trapped after the quake in late July. The park has been closed since then.

Sunday's tremors were also felt on Bali but there were no reports of damage there.

The latest tremor comes two weeks after a shallow 6.9-magnitude quake on August 5 damaged tens of thousands of homes, mosques and businesses across Lombok.

At least 481 people died and thousands were injured.

The hardest-hit region was in the north of the island, which has suffered hundreds of aftershocks.

A week before that quake, a tremor surged through the island and killed 17.

The disasters have raised fears that Lombok's key tourism industry would take a beating, but the international airport was operating normally Monday.

"People have been arriving and leaving Lombok as usual since last night -- there's been no sudden rush of people trying to get out," said I Gusti Ngurah Ardita, general manager of Lombok Praya International Airport.

Indonesia sits on the so-called Pacific "Ring of Fire", where tectonic plates collide and many of the world's volcanic eruptions and earthquakes occur.

The Australian and Eurasian plates, which sit under the archipelago, have been colliding and putting stress on key area fault lines, according to a geologist.

"Clearly there are different parts of the fault that are moving at the moment releasing those stressors," said Chris Elders, an expert in plate tectonics and structural geology at Curtin University in West Australia.

In 2004 a tsunami triggered by a magnitude 9.3 undersea earthquake off the coast of Sumatra in western Indonesia killed 220,000 people in countries around the Indian Ocean, including 168,000 in Indonesia.