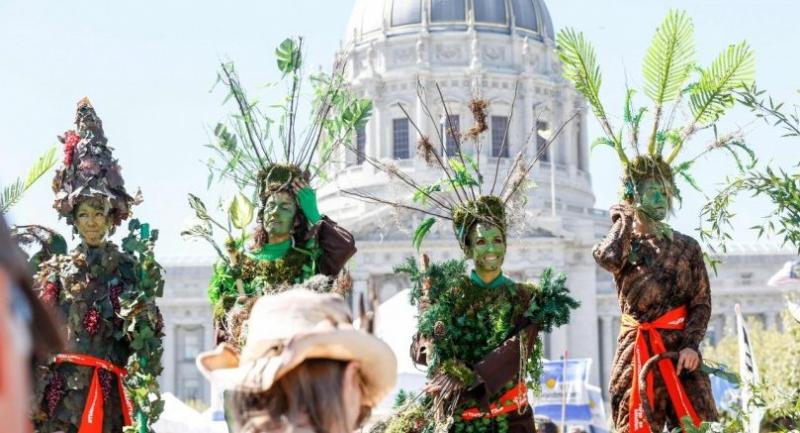 Women dressed as trees with the group The Forgotten Solution, join the crowds at Civic Center Plaza after marching at the 'Rise For Climate' global action on September 8, 2018 in downtown San Francisco, California.//AFP

Paris - From Bangkok to Paris and San Francisco, tens of thousands of people across the world took to the streets on Saturday to demand governments take action against climate change, as key UN talks attempt to breathe life into the Paris Agreement.

Nearly 1,000 events were organised in around 100 countries as part of the "Rise for Climate" protest movement that called on countries to end their reliance on fossil fuels and transition fully into renewable energy.

Organisers in France claimed 115,000 people turned out in what would be the largest environmental demonstration in the country's history, with 50,000 marching in Paris, however police put the number in the capital at 18,500.

"This is the biggest day of climate action in France, it's proof that the citizens are ready to demand commitments from our elected officials after a catastrophic summer when it comes to the climate," said Clemence Dubois, the France campaigner for 350.org.

"Extreme weather is threatening our children. The only way to protect our future is ambitious #ClimateAction now," he tweeted.

Dozens of Thai fishermen and labourers whose livelihoods are threatened by rising sea levels kicked off the day of protests in Bangkok, where the UN talks are being held.

Many brought examples of their produce, including crabs and shrimp, and held banners demanding that delegates take action.

Some 200 protesters assembled in front of the UN regional headquarters in Bangkok, where delegates were discussing how to implement measures agreed by world powers under the 2015 Paris Accord on climate change.

As global warming races ahead of efforts to contain it, the discussions are deadlocked over a number of contentious issues.

The talks aim to create a draft legal framework for limiting global temperature rises that can be presented to ministers and heads of state at a final round of discussions in Poland in December.

The delegates have been meeting since Tuesday, but have made little progress, according to multiple sources close to the negotiations.

"The negotiators are not taking any action," Ruchi Tripathi, head of climate justice at charity ActionAid, told AFP.

More than 10,000 people turned out in Danish capital Copenhagen, police there said, while 1,300 rallied in front of the European Parliament in Brussels.

"The idea was to challenge the elected officials and governments in the European capital," said teacher Kim Le Quang at the demonstration.

"There are a lot of lobbies here and we realise that NGOs do not necessarily have the influence to fight them."

As part of protests in Australia, a tall ship moved through Sydney Harbour in front of the Opera House as activists on board held up protest signs.

Its billowing sails featured banners that read "Rise for Climate; Action with 350" -- referring to environment advocacy group 350 which spearheaded the global protest.

In Manila, more than 800 people, including one dressed as a T-Rex holding a "Go Fossil Free" sign, marched through the streets protesting the country's heavy reliance on coal.

Along with Bangkok, the Philippine capital is projected to be among the world's hardest hit urban areas by climate change impacts.

"We are among the most vulnerable and we are among those still stuck in an energy system that is backwards," campaigner Chuck Baclavon told AFP, adding that the government is out of excuses.

Around 10,000 school students and their teachers in northern India tied red ribbons to trees in a call to end deforestation.

The protests are expected to culminate Saturday in San Francisco, where sub-national governments, regions, cities and businesses will gather on September 12 at the Global Climate Action Summit, organised to react to what's seen as the climate policy failures of US President Donald Trump.

Trump caused global outrage by announcing the US would withdraw from the Paris Accord, but multiple sources told AFP Saturday that America is stonewalling UN talks over how to fund poorer nations in the battle against global warming.

"The US is no longer playing the game but it's still setting the rules," said a senior climate negotiator, who spoke on condition of anonymity.