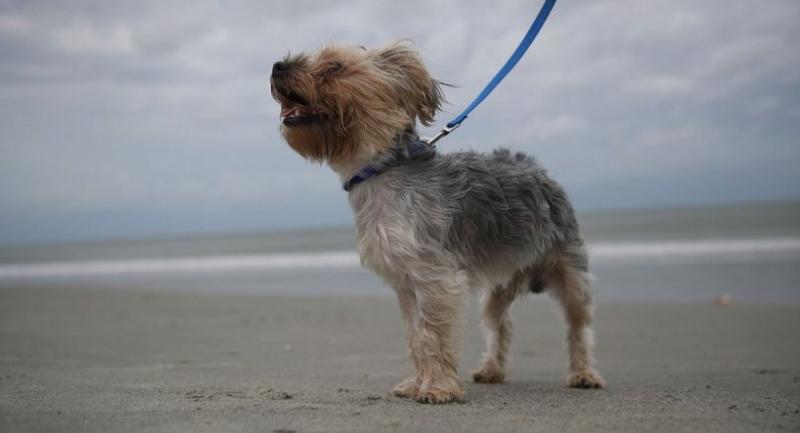 The wind blows as Reyes visits the beach as people await the arrival of Hurricane Florence on September 13, 2018 in Myrtle Beach, South Carolina.//AFP

Wilmington, United States - Hurricane Florence battered the Carolinas early Friday with howling winds, life-threatening storm surges and torrential rains as it edged closer to the coast in what officials warned is a "once in a lifetime" event.

Reports said coastal streets in North Carolina were flooded and winds bent trees to the ground as the storm, which has been downgraded to Category 1 and is weakened and slower moving than in recent days, prepared to make landfall at some point on Friday.

More than 150,000 customers in North Carolina were reported to be without power as the outer band of the storm approached.

Footage from US TV outlets showed raging waters hitting piers and jettys and rushing across coastal roads in seaside communities.

In its 0600 GMT advisory, the center said Florence was over the Atlantic Ocean about 35 miles (55 kilometers) east of Wilmington, North Carolina and moving northwest at six miles per hour (10 kilometers per hour).

It added that the maximum sustained winds were 90 miles per hour. Florence is now at the weakest of five categories on the Saffir-Simpson scale.

In a display of the early effects of the storm, one flood gauge on the Neuse River in New Bern, North Carolina, showed 10 feet (three meters) of flooding, the NHC said.

With winds picking up along the coastline earlier Thursday, federal and state officials had issued final appeals to residents to get out of the path of the "once in a lifetime" weather system.

In Wilmington, a steady rain began to fall as gusts of winds intensified, causing trees to sway and stoplights to flicker.

"We live in a mobile home so we were just like 'No way,'" she said. "If we lose the house, oh well, we can get housing.

"But we can't replace us so we decided to come here."

Steve Goldstein of the National Oceanic and Atmospheric Administration said Florence's forward motion had slowed and it was not expected to make landfall in the Carolinas until "some time Friday afternoon, Friday evening or Saturday morning."

Some areas could receive as much as 40 inches (one meter) of rain, forecasters said.

A tornado watch was also in effect for parts of North Carolina.

Brock Long, the administrator of the Federal Emergency Management Agency (FEMA), warned the danger was not only along the coast: "Inland flooding kills a lot of people, unfortunately, and that's what we're about to see," he said.

About 1.7 million people in North Carolina, South Carolina and Virginia are under voluntary or mandatory evacuation orders and millions of others live in areas likely to be affected by the storm.

A state of emergency has been declared in five coastal states -- North Carolina, South Carolina, Georgia, Maryland and Virginia.

Duke Energy, a power company in the Carolinas, estimated that one million to three million customers could lose electricity because of the storm and that it could take weeks to restore.

Not everybody was heeding orders to evacuate, however.

Antonio Ramirez, a construction worker from El Salvador living in Leland, North Carolina, said he planned to ride out the worst of the weather with his dog Canelo.

"The shelters are not taking dogs," Ramirez said. "I'm not leaving him here.

In Wilmington, residents who had decided not to evacuate were lining up to get ice from a vending machine -- $2 for a 16-pound (7.2-kilo) bag.

"I have no generator," said Petra Langston, a nurse. "I learned from the past to keep the ice in the washing machine."

Perched on the porch of his home, carpenter Tony Albright was calmly awaiting Florence's arrival, beer in hand.

"I built this house myself, so I'm not worried at all, I know it's solid," he said. "I charged the batteries of my electronic devices, I have beers and video games."

"The only thing missing in there is a hot lady."