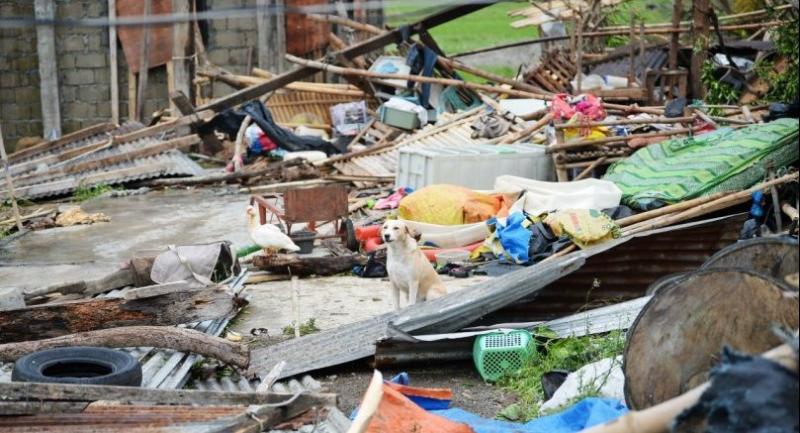 A dog and a duck sit amongst the ruins of a house after Super Typhoon Mangkhut hit the town of Alcala, Cagayan province on September 15, 2018./AFP

Bebeth Saquing has seen dozens of storms in her lifetime, but nothing prepared her for the terror of Super Typhoon Mangkhut as it roared over her Philippines home Saturday packing winds of more than 250 kilometres (155 miles) per hour.

The most powerful storm to hit the region so far this year left a trail of battered homes, landslides and fallen trees in its wake.

At least four people were killed as the typhoon smashed across the rural north of the country, a farming area home to millions.

"It felt like the end of the world... that was stronger than Lawin", said Saquing, 64, referring to a powerful super typhoon which hit the region in 2016.

"I did not sleep," she told AFP by phone from her home on Luzon, which withstood Mangkhut's pounding.

Evidence of the massive storm's passage was everywhere on Saturday.

Authorities were just beginning their surveys of the damage on Saturday afternoon.

Convoys were heading out on the winding roads of the rural area, which produces a significant portion of the nation's corn and rice.

Fear was widespread among many of the estimated four million people in the storm's path long before it made landfall.

Myrna Parallag and her two young grandchildren fled their home a day before Mangkhut struck.

"I'm afraid that the floodwaters will be high and will reach our house," the 53-year-old told AFP on Friday as she looked for shelter near the city of Tuguegarao.

This was not her first storm. Parallag survived Lawin, also known as Super Typhoon Haima, but it destroyed her house.

Her worries and those of thousands of others were well founded.

The storm claimed its first victims on Saturday, including two women who were buried when a rain-soaked hillside collapsed.

"As we go forward, this number will go higher," said Ricardo Jalad, head of the national civil defence office, referring to the death toll.