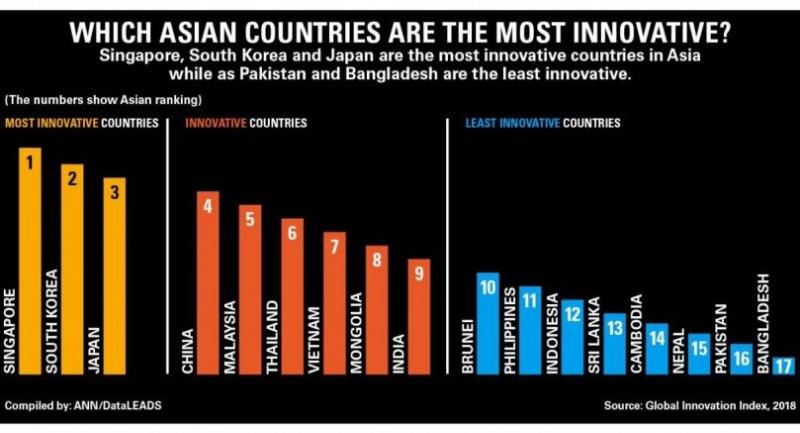 NEW DELHI - Singapore, South Korea and Japan are the most innovative countries in Asia whereas Pakistan and Bangladesh are the least innovative, according to the Global Innovation Index 2018 report.

The report  analyses the energy innovation landscape of the next decade and identifies possible breakthroughs in fields such as energy production, storage, distribution, and consumption. It also looks at how breakthrough innovation occurs at the grassroots level and describes how small-scale renewable systems are on the rise.

South East Asia is at the third place globally in terms of innovation. Singapore leads the region with a high score in most of the indicators. Globally it has moved two positions up since last year.

China is ranked fourth in Asia. The country has been on a dynamic innovation trajectory. China’s innovation prowess has been evident in its global R&D companies, hightech imports, the quality of its publications, and tertiary enrolment.

It is followed by Malaysia which is ranked fifth in Asia and is one is one of the middle income countries that is edging closer. This year it moved ahead in the rankings with strengths in Tertiary education, Knowledge diffusion, and Creative goods and services.

Thailand ranked sixth has outperformed on innovation relative of its development, according to the report. It is followed by Vietnam and Mongolia ranked seventh and eighth in Asia respectively.

India ranked ninth is Asia is also seen as an overachiever in relation to its development.  As per the report India is one such country that make a significant change in the innovation landscape.

Although Brunei is a high income country the innovative input score is very less.  It is ranked tenth in Asia. It is followed by Philippines and Indonesia. Sri Lanka, Nepal, Pakistan and Bangladesh are the least innovative countries in Asia.

As per the report, innovation in Asia can grow if if increased protectionism—in particular protectionism that impacts technology-intensive sectors, IP, and knowledge flows across the board—could be contained.

Such dynamics, as per the report, could create the basis for productive knowledge spillovers and opportunities for collaboration and the generation of new knowledge and innovation.