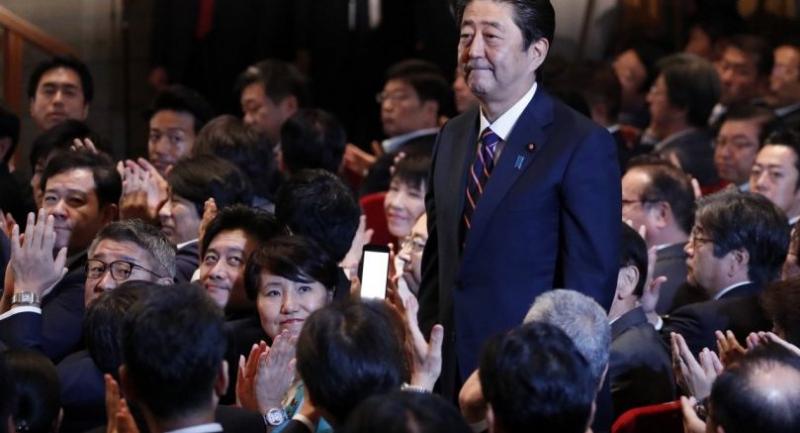 Japan's Prime Minister and president of the ruling Liberal Democratic Party's (LDP) Shinzo Abe (C) reacts after being re-elected as leader of the LDP at the party's headquarters in Tokyo, Japan, on September 20.//EPA-EFE

Tokyo - Prime Minister Shinzo Abe won comfortable re-election as leader of his ruling party Thursday, setting him on course to become Japan's longest-serving premier and realise his dream of reforming the constitution.

The 63-year-old conservative secured 553 votes against 254 won by former defence minister Shigeru Ishiba, a hawkish self-confessed "military geek", in a two-horse race for leader of the Liberal Democratic Party.

The win effectively hands Abe three more years as PM, giving him the chance of breaking the record for the nation's longest serving premiership held by Taro Katsura, a revered politician who served three times between 1901 and 1913.

To loud cheers of "banzai" -- the Japanese equivalent of "three cheers" -- from party members, a grinning Abe said: "The battle is over. Let's build a new Japan by joining hands and uniting."

Shinichi Nishikawa, professor of politics at Meiji University in Tokyo, told AFP that the vote was effectively a referendum on Abe's record that he successfully negotiated.

"But he can't wholeheartedly welcome the result as he couldn't win overwhelmingly."

Public support for Abe -- a political thoroughbred whose grandfather and father both held power -- has recovered after he managed to survive a series of cronyism and cover-up scandals.

Reconfirmed in power, Abe will head to New York this weekend to attend the UN General Assembly and hold a summit with US President Donald Trump.

Abe and Trump, who enjoy each other's company on the golf course and are close diplomatic allies, are expected to analyse the latest inter-Korean summit.

But they will also have to confront a growing trade dispute as Trump sees Tokyo among "unfair" trade partners.

While Japanese voters put the economy and social security as their top priorities, Abe aims to use the election to push his dream of reforming the country's post-World War II pacifist constitution.

Nationalist Abe has frequently voiced his wish to rewrite the charter, imposed by the victorious US occupiers, which forces the country to "forever renounce war" and dictates that armed forces will "never be maintained".

Abe insists any changes would merely remove the country's well-equipped Self-Defense Forces from the constitutional paradox whereby they should not technically exist.

"It's time to stipulate both the Self-Defense Forces and the protection of Japan's peace and independence in the constitution," Abe said in his last stump speech in Tokyo.

"Together with you all, I want to work on reforming the constitution," he said in his victory speech on Thursday.

But any changes to the text would be hugely sensitive in pacifist Japan and almost certainly greeted with fury in China and the Koreas, 20th-century victims of Japanese military aggression.

Even if Abe manages to force a revision through parliament, he would face a referendum, raising the prospect of a Brexit-style political meltdown if the people vote against him, said Yu Uchiyama, political scientist from the University of Tokyo.

In addition, surveys show that tinkering with the legal text is far from top of most Japanese voters' to-do list, as the country faces an ageing and declining population and a still-sluggish economy.

Acknowledging concerns over the economic outlook, Abe said he plans to introduce "bold" stimulus measures to ease the expected impact of a tax hike scheduled for October next year.

Japan's economy has been expanding for the past few years at a slow pace thanks to the Bank of Japan's ultra-loose monetary policy and huge government spending, which have led to a weak yen -- a key positive element for Japanese exporters.

But analysts warned US-led trade wars could be a major risk factor for an economy still struggling to win a long battle against deflation.

Local media said Abe plans to reshuffle his cabinet on October 1. However, he is expected to retain Vice Prime Minister and Finance Minister Taro Aso, a political ally who has backed his "Abenomics" strategy to stimulate the world's third-largest economy.