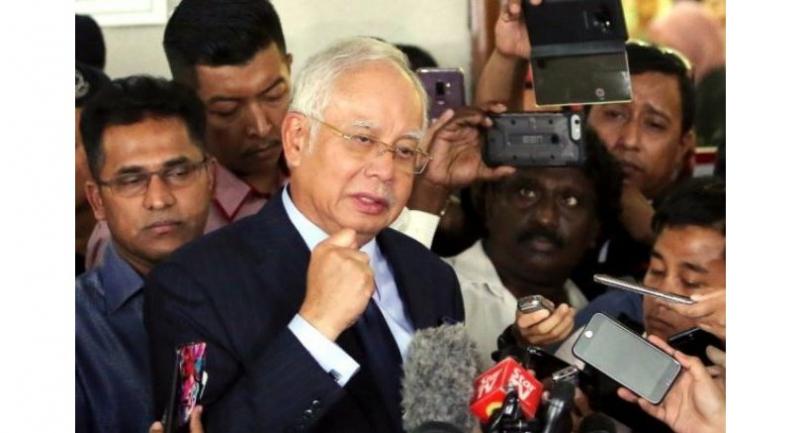 KUALA LUMPUR: Embattled former prime minister Najib Razak, who was slapped with 25 fresh corruption and money-laundering charges on Thursday (Sept 20) has once again said that he is not a thief.

"As we all know, the RM2.6 billion issue was used relentlessly to criticise and tarnish my name all this while.

"All the charges today will give me a chance to clear my name – that I am not a thief.

"I hope my journey in court will uphold the truth and put to rest this RM2.6bil issue once and for all," he said to reporters right before leaving the Kuala Lumpur High Court on Sept 20.

"I don't want to make any statements that can be deemed as sub judice. But for me and my team of lawyers, God willing, we have facts that are on our side.

"We hope that the (eventual) verdict will show that the rule of law does indeed exist in this country."

Najib also downplayed the latest charges against him, saying that once the public comprehends the facts and figures behind the case, they will realise that it is not such an "explosive" accusation.

"Once we understand the facts and we do some calculations, we will come to the conclusion that I returned a large sum of money right after the 13th General Election.

"I want to thank the Malaysian Anti-Corruption Commission (MACC) and the police for treating me well.

"I have no problems going through the legal process as long as I'm given justice and a chance to clear my name," he said.

Najib was granted bail of RM3.5mil with two sureties in his latest court case after he was slapped with 25 graft and money-laundering charges involving RM2.3bil.

Najib's lawyer Tan Sri Muhammad Shafee Abdullah requested for bail to be paid in staggered payments, with RM1mil to be paid on Friday (Sept 21) and another RM500,000 next week.

"Our bank downstairs (in court) takes half a day to count RM500,000, unlike our Indian money changers," he said on Thursday (Sept 20).

Sessions Court judge Azura Alwi allowed the bail payments be made over a period, as long as it was settled by Sept 28.

According to the charge sheet, the offences occurred at the AmIslamic Bank Berhad branch on Jalan Raja Chulan here while in his position as a civil servant when he was prime minister, finance minister and the adviser emeritus of 1MDB.

Previously Najib was charged with receiving RM42mil bribe as an inducement to come to a decision on behalf of the Malaysian government to provide a sovereign guarantee for a loan of RM4bil from the KWAP to SRC International Sdn Bhd.

He also faces three other charges of criminal breach of trust in his capacity as then prime minister, finance minister and adviser emeritus of SRC International, in which he was entrusted with RM4bil.

He is alleged to have misappropriated funds through various banks here on three occasions between Dec 24, 2014 and March 2, 2015, amounting to RM27mil, RM10mil and RM5mil.

He was later hit with another three counts of money-laundering amounting to RM42mil under Section 4(1)(b) of Amlafta.

The High Court released Najib on bail of RM1mil with two sureties, and the additional condition that Najib surrender both his normal and diplomatic passports.

Tags:
Najib Razak arrest 25 charges corruption money-laundering I am I am not a thief