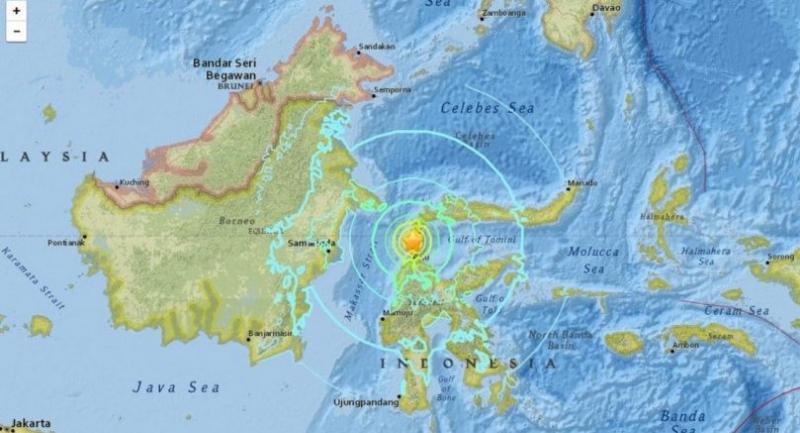 A map shows the area of an earthquake that hit Central Sulawesi on Friday. (File/-)

The chairwoman said the waves struck at least two locations in the province, namely Mamuju and the provincial capital of Palu.

She claimed the height of the waves decreased gradually, prompting the agency to end the tsunami warning status at 5:36 p.m.

The agency confirmed a tsunami had struck the province hours after videos of what appeared to be a tsunami hitting Palu Grand Mall and Baiturrahman Mosque had been circulating online.

Critics have questioned why the agency decided to revoke the warning when a tsunami did take place.

The BMKG issued a tsunami warning for the western and central part of Sulawesi at 5:07 p.m. The warning, however, was revoked around 30 minutes later.

According to the National Disaster Mitigation Agency (BNPB), the BMKG had initially given a different reason for revoking the warning.

“The decision was based on visual monitoring and further monitoring using the equipment [tsunami detection buoys] at the sea for 30 minutes. The BMKG did not see any significant change in the sea level. That’s why they ended the alert,” BNPB spokesman Sutopo Purwo Nugroho said in a statement.

The 7.7-magnitude earthquake hit Donggala regency, around 73 kilometers from Palu, at 5:02 p.m. Jakarta time. Sutopo said in a written statement that the epicenter of the quake was located about 27 km north-east of Donggala at a depth of 10 km.