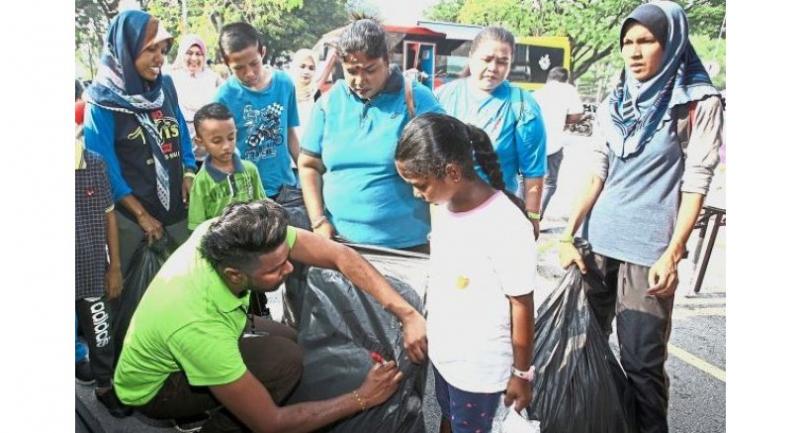 Participants weighing the trash they collected during the 1km walk.

MBSA MPP Zone 9 councillor Yugarajah Palanisamy said he was setting up a Used Oil Collection corner at his office in Taman Sri Muda.

He said residents could drop off used oil together with their names and handphone numbers for the council to pay them later.

“They do not need to wait for us to be there, they can drop off the used oil, and we will call them up for the payment of RM1 per kg,” he said.

Taman Sri Muda has a notoriety for dirty back alleys and rodent infestation that MBSA has been trying to battle.

The council spent over RM512,000 in the past three years to clean the drains to prevent blockage.

Yugarajah said it was time to educate the public on the dangers of pouring used cooking oil into the sinks as that would eventually clog up drains.

“This has become a culture for Malaysians. I think this habit can be traced back to our grandmothers and mothers. Nobody taught them the right disposal methods, but now we are trying to do it,” he said.

He said he hoped that the incentive given to traders and residents for selling used oil would encourage them to stop reusing cooking oil, which would affect food safety. He added that used cooking oil collected could be turned into biodiesel, or to make soaps and candles. Yugarajah said this during the Jom Sihat – Berjalan Bersama Komuniti dan Kitar Semula 2018 event.

The event saw some 150 participants coming together to walk 1km around Taman Sri Muda’s commercial area and collected rubbish along the route.

Ganabatirau applauded the residents for cleaning up the area, adding that the event should be held on a regular basis.

Zamri said the event was a great way to educate residents on the importance of cleanliness.

Participants collected 227kg of rubbish during the event that started at 7.30am.

Those who collected the most amount of rubbish received prizes while some brought home attractive lucky draw prizes.