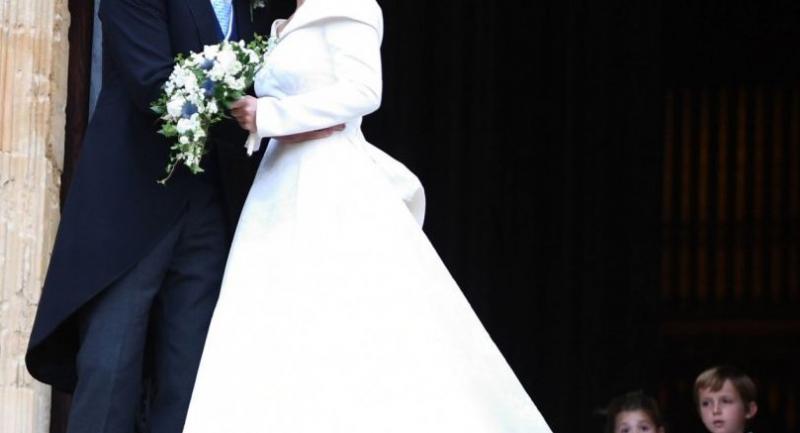 Britain's Princess Eugenie of York (R) and her husband Jack Brooksbank kiss as they emerge from the West Door of St George's Chapel, Windsor Castle, in Windsor, on October 12, 2018 after their wedding ceremony.//AFP

Windsor, United Kingdom - Queen Elizabeth II's granddaughter Princess Eugenie married a wine merchant on Friday in a Windsor wedding clouded by complaints over costs and struggling to recapture the magic of past royal nuptials.

The big day for the ninth in line to the throne and Jack Brooksbank -- a "commoner" with blue-blood friends -- comes on the heels of Prince Harry and Meghan Markle's fairytale service in May.

That event was watched by adoring masses and followed by months of fawning UK headlines about the US actress who charmed her way into the royal court.

But what may be a mixture of royal wedding overload and scepticism about Eugenie's role in Britain's public life stripped Friday's ceremony of some of its charm.

They noted the expense could have been spared had Eugenie not insisted on having a horse-drawn carriage parade around Windsor -- just like Meghan and her prince.

The BBC also reportedly caused Buckingham Palace upset by deciding not to televise the event live because of its likely low ratings.

The smaller ITV commercial channel picked up the broadcast for its morning programme aired directly from a studio overlooking Windsor's lawn.

ITV spent much of the morning discussing the fierce gusts of wind that forced arriving guests to grasp for their complicated hats and to rearrange their morning coats.

"Unfortunately, this is not a good wedding hair day," one of ITV morning show hosts observed.

The lines of people covered in the Union Jack during Eugenie's procession through the heart of Windsor were noticeably thinner than five months ago.

The couple did their best to win over the crowds by doing taped interviews for ITV, in which they heaped each other with praise.

And Eugenie won plaudits on social media for deciding to wear a dress that revealed the long scar from a childhood operation running down her spine.

Buckingham Palace said was "the specific request of Princess Eugenie who had surgery aged 12 to correct scoliosis."

"I think you can change the way beauty is, and you can show people your scars and I think it's really special to stand up for that," Eugenie told ITV's morning show.

The ceremony itself featured 850 guests and much of the morning saw royalty and celebrities strolling up to Windsor and arranging themselves in its magnificent 14th-century chapel.

But George Clooney was a surprise no-show despite creating the expensive brand of tequila Jack was the ambassador for in Europe.

Jack himself mixes in London's glitzy social circles but is unknown to most outside the celebrity gossip world.

He managed a posh cocktail bar in London favoured by royals called Mahiki and has since launched his own wine wholesale business.

Press reports said he has lately harboured dreams of launching his own chain of pubs.