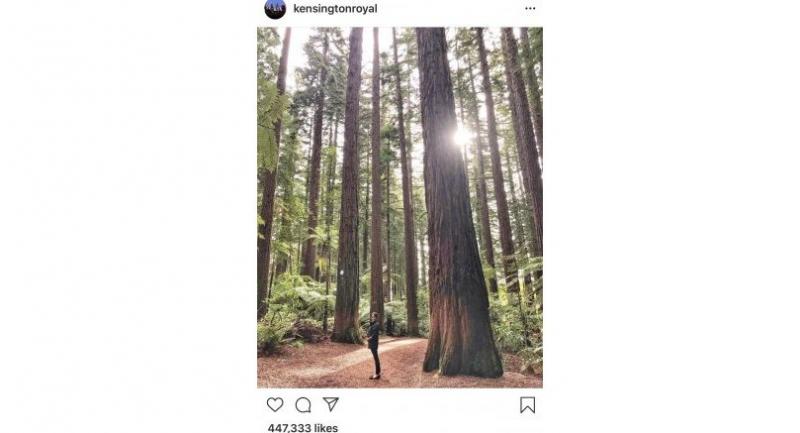 Prince Harry has shared a photograph of his wife Meghan Markle cradling her baby bump during a walk through a forest in New Zealand on their recent Pacific royal tour.

The couple's Kensington Palace residence published the image on Instagram, with a photo credit for the prince, and a caption which said the couple had returned home "inspired" by their trip.

Thank you New Zealand for the most wonderful last week of our tour," the message read, attributed to the Duke and Duchess of Sussex.

"It has been a privilege to meet so many friendly Kiwis. Australia, Fiji, Tonga and NZ - we leave feeling inspired and reminded of how every single one of us can make a difference."

It was followed by a quote from Kate Sheppard, the Liverpool-born leader of the women's suffrage movement in New Zealand: "The rain that refreshes the parched ground, is made up of single drops."

Women's rights featured prominently during the tour, with the couple attending a ceremony to mark 125 years of universal female suffrage in New Zealand and Meghan quoting Sheppard in a speech.

The photograph captures the beaming former actress with her hands on her tummy standing among enormous redwood trees in Rotorua on Wednesday, the final day of their tour.

The couple's 16-day tour opened with the bombshell announcement that Meghan was expecting the couple's first baby early next year.

The publication of one of Harry's own photos follows in the footsteps of his sister-in-law, the Duchess of Cambridge who regularly shares relaxed photographs of her children.