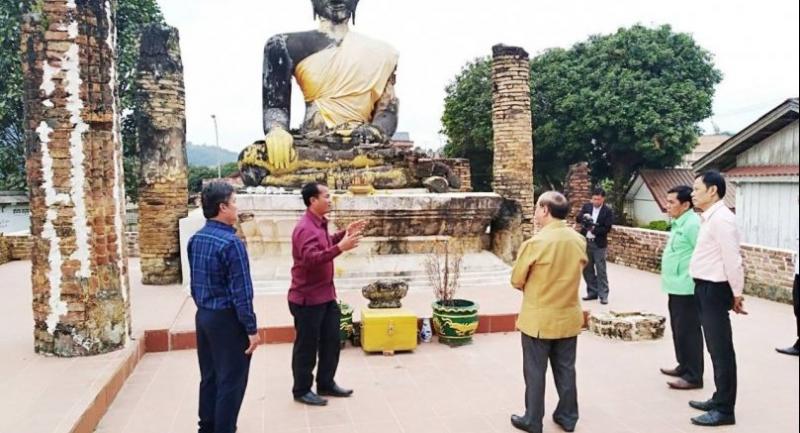 While there are numerous large Buddha images across Asia like those in China, Vietnam and Thailand, the striking example at Phiavat temple stands out as it still bears the scars of war.

An official from Xieng Khuang province, Mr Phonkeo Houngaloun, spoke to Vientiane Times recently in Khoun district, where the large Buddha image and temple are located.

Journalists accompanied the Minister of Information, Culture and Tourism, Prof. Dr Bosengkham Vongdara, on his visit to the province to discuss progress in listing the Plain of Jars at the UNESCO meeting in Azerbaijan next year.

The minister visited Phiavat temple and That Foun (stupa) in Khoun district, also stopping to dine on some tasty local food before continuing to the provincial capital of Phonsavanh in Paek district.

As we walk in front of this huge Buddha, officials tell the minister that local villagers want to repair the Buddha’s right arm which was broken during wartime bombing.

However, the conversation is cut short as clouds from the mountains unload a deluge on the Vientiane visitors.

“This matter is being considered by the ministry in response to requests by local people,” Mr Phonkeo said as everyone rushed back to their cars.

Khoun district is also home to That Foun which is only about 5 minutes away by car. Most of the province’s 75,000 international visitors usually base themselves in Phonsavanh with many venturing out to see the large Buddha.

A large bomb crater once existed in the temple grounds near the Buddha but this is now no longer visible as village folk filled it in with soil.

In days gone by, eight main pillars supported the roof of Phiavat temple and lotus buds decorated their tops. Other patterns featured intertwining scrolls of foliage such as blooming flowers and diamond-shaped leaves.

The Buddha statue sits on a lotus bud in the classical position calling on the Earth to witness his attainment of enlightenment. Tight coils of hair, long and slightly curved earlobes, eyes in a downward gaze, and a serene smile are traits of the Buddha.

This large Buddha image, Pha Ongteu, and remnants of the pillars are traces of Vat Phiavat’s former grandeur.

The temple was built in the 14th century and it is believed that the same craftsmen also built Vat Si Phom located a few blocks away. In the 19th century, looting bandits and invading armies damaged Vat Phiavat as they searched for riches.

For That Foun (stupa) is named after ashes. Why would ashes be so important? A legend describes this monument housing relics or ashes from the cremation of the Buddha. Peering inside large holes, it is evident that That Foun was built over a smaller stupa.

The mount to the east of the monument was once a religious hall. Only pillars and the raised floor survived the turbulent times of the 19th century. The bombings of the second Indochina War damaged these remnants.

Xieng Khuang province is about six hours by road from the Vientiane. Many people coming from the south take the road through Borikhamxay as it is much shorter than travelling via the winding and mountainous Road No. 13 North through Phoukhoun.

A 29-km section of the road in Borikhamxay province that links to the north is currently being rebuilt. At Thasy village, vehicles can turn left on to Road No. 1D towards Xieng Khuang.