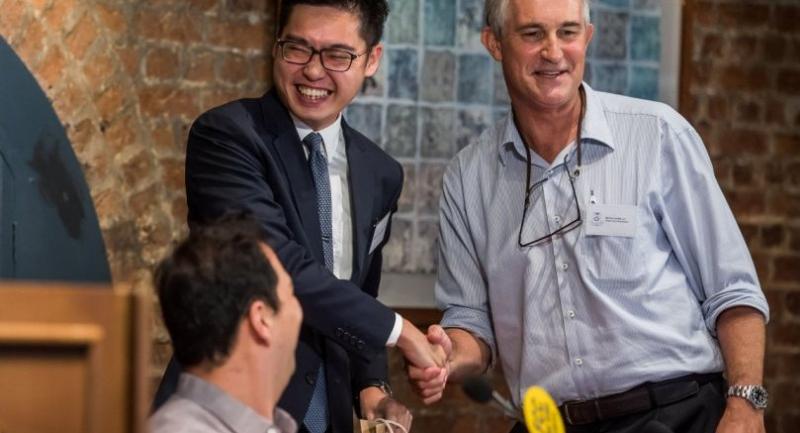 Andy Chan Ho-tin (L), founder of the Hong Kong National Party, shakes hands with Financial Times journalist and first vice president of the FCC Victor Mallet (R) during a luncheon at the FCC in Hong Kong, China in August.//EPA-EFE

Hong Kong - Rights campaigners Friday denounced Hong Kong's barring of a senior Financial Times journalist as another blow to press freedom in the city which has come under increasing pressure from an assertive China.

On Friday a second venue which had agreed to host the author's two speaking events also pulled out.

The literary festival had announced late Thursday that Ma's talks would be hosted at the central Annex exhibition space, but the venue said in a statement to AFP Friday it had "no affiliation with the event or the author" and would not host him.

Ma, a Hong Kong permanent resident and British passport holder, is due to land in the city on Friday afternoon and has expressed concern he will also be refused entry.

Amnesty International said the refusal to allow Mallet in was a "distressing signal" about the state of press freedom in Hong Kong and smacked of "retaliation" against Mallet.

The veteran journalist had already had his work visa renewal denied last month and had left Hong Kong, but was barred when he tried to come back in for a short stay as a visitor.

British citizens are usually allowed into Hong Kong without a visa and are permitted to stay for 180 days under immigration rules.

The government has given no explanation for the original refusal to extend his visa but it is widely believed the decision was linked to Mallet's chairing of a talk by a Hong Kong independence activist at the city's Foreign Correspondents' Club (FCC), where he is first vice president.

China's foreign ministry had asked for the event to be cancelled.

The FT has said it would appeal against the original visa denial.

Security minister John Lee insisted Friday the decision to prevent Mallet from entering as a tourist was "nothing to do with freedom of expression and freedom of the press" adding he would not reveal the reasons due to "data privacy" and the risk of "prejudice" to immigration policy.

The FCC said it was "shocked and baffled" and described the move as an "aggravated and disproportionate sanction that seems completely unfounded".

Authorities have turned away British nationals before -- activist Benedict Rogers, deputy chairman of the Conservative Party's human rights commission, was blocked by immigration after landing for what he said was a private trip in 2017.

Rogers called the barring of Mallet a "bizarre decision" for a global financial hub.

Human Rights Watch warned the gathering crackdown on freedoms by Hong Kong and Chinese authorities had led to "spreading censorship and self-censorship".

Hong Kong enjoys freedoms unseen on the mainland, protected by an agreement made before the city was handed back by Britain to China in 1997, but there is growing evidence those rights are being eroded.

But pro-Beijing legislator Regina Ip defended the decision and accused Mallet of coming into Hong Kong to "test the bottom line" of the government.

"If the government's view is that this person was involved in assisting and providing a platform for people who are advocating dividing the country... I think the immigration department's decision is reasonable," Ip told reporters.

Another pro-Beijing lawmaker Michael Tien told AFP: "You cannot take everything for granted," adding it was the government's right to decide on visas.

The Tai Kwun arts centre, a major new cultural hub in Hong Kong, pulled talks by dissident author Ma on Thursday, with venue director Timothy Calnin saying it did not want to become "a platform to promote the political interests of any individual".