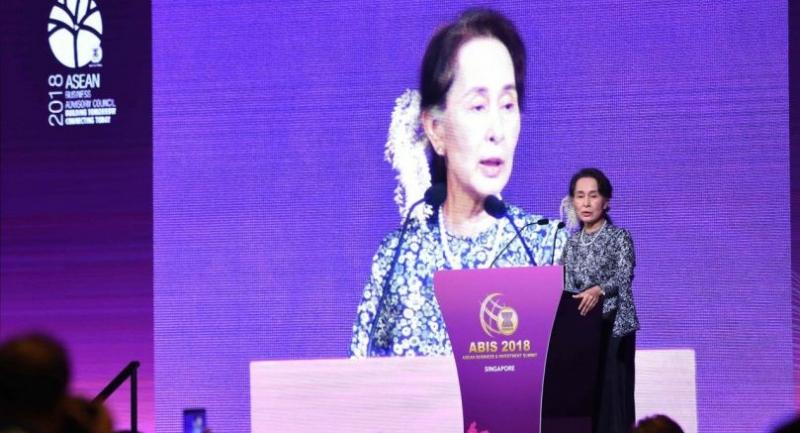 Myanmar State Counsellor Aung San Suu Kyi speaks at a business forum on the sidelines of the 33rd Association of Southeast Asian Nations (ASEAN) summit in Singapore on November 12.//AFP

Singapore - Myanmar's Aung San Suu Kyi on Monday implored foreign investors to take a punt on her country -- Southeast Asia's "final frontier" -- but warned its resources are not open for exploitation at the cost of its people.

Suu Kyi, Myanmar's de facto leader, has toured Asia in recent months beating the drum for her country's economy, which the World Bank forecasts to grow at seven percent next year.

A tangle of investment laws, a weakening currency, high inflation, widespread corruption and conflict have chipped away at an economy that was hoped to take off following the start of civilian government in 2016 after decades of junta rule.

At the same time Suu Kyi's image as an upholder of human rights, and that of her country, has been decimated by the Rohingya crisis.

Speaking at a business forum in Singapore ahead of a regional summit, she did not address the crisis which has sent hundreds of thousands of the Muslim minority into Bangladesh and extinguished optimism in some corners over Myanmar's future.

Rumblings of the potential re-imposition of some western sanctions over the treatment of the Rohingya have also darkened the economic outlook for the country.

But Suu Kyi was at pains to say Myanmar was still open for business.

Myanmar is "Southeast Asia's final frontier market... we have land, we have (a) good young working population, we have unexplored resources," she said.

She warned investors not to expect an open season on the country's abundant natural resources which include precious stones, vast tracts of arable land and waterways.

"We have to invest for the sake of social cohesion," and not "purely for economic gain," she said, referencing Myanmar's resource-rich but conflict riddled borderlands.

Chinese mega-projects have come under fire inside Myanmar with accusations of land grabs, extractive practices and debt loading onto the government.

Protests against Chinese projects are common.

Last week Myanmar successfully scaled down a China-backed port project from $10 billion to $1.3 billion at the strategically important Kyaukphyu area of Rakhine state, where the Rohingya were driven from last year.

Suu Kyi said Myanmar needs the help of investors, in particular from Asia, to pull itself forwards after years of ulcerous junta rule and urged businesses to gamble on an "adventure" in the country.

Myanmar may face pressure over its handling of the Rohingya crisis later in the week as the Association of Southeast Asian Nations summit begins.