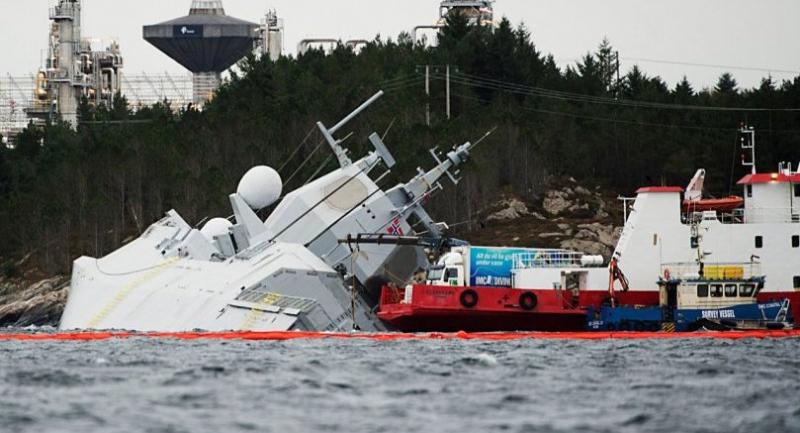 The Norwegian frigate "KNM Helge Ingstad" takes on water after a collision with the tanker �Sola TS� on November 10, 2018 in the Hjeltefjord near Bergen. // AFP PHOTO

A Norwegian frigate that collided with a Maltese tanker in a fjord in western Norway last week was almost entirely submerged on Tuesday after cables holding it in place broke.

"The vessel is now lying immobile in deeper water," the head of the Navy's rescue operation, Havard Mathiesen, told reporters.

A modern ship weighing around 5,000 tonnes, the KNM Helge Ingstad took on water after colliding with the Maltese oil tanker early Thursday in the Hjeltefjord near Bergen. The Norwegian frigate "KNM Helge Ingstad" is seen partly under water in the sea near Bergen, western Norway, on November 13, 2018. - The frigate capsized after collision with a tank ship �Sola TS� on November 8, 2018. // AFP PHOTO

The accident, the cause of which has yet to be determined, injured eight of the 137 people on board the frigate, which was returning from NATO's Trident Juncture 18 exercises.

The tanker, the Sola TS, suffered only minor damage.

The KNM Helge Ingstad had until Tuesday been partially submerged as it rested on underwater rocks, which its crew had driven it up on in order to try to prevent the ship from sinking.

But the cables holding it in place broke overnight Monday to Tuesday, and the ship sank further under the water.

Only the top of its mast and a small part of its stern were visible above water on Tuesday, television footage showed.

The Norwegian Navy said it was now considering ways to raise the vessel, the military's chief of staff, Admiral Nils Andreas Stensones, said.

"It's very hard for a navy to lose a vessel," he said.

Meanwhile, the Norwegian Coastal Administration said it had cleaned up some 13 cubic meters of diesel that spilled in the accident.