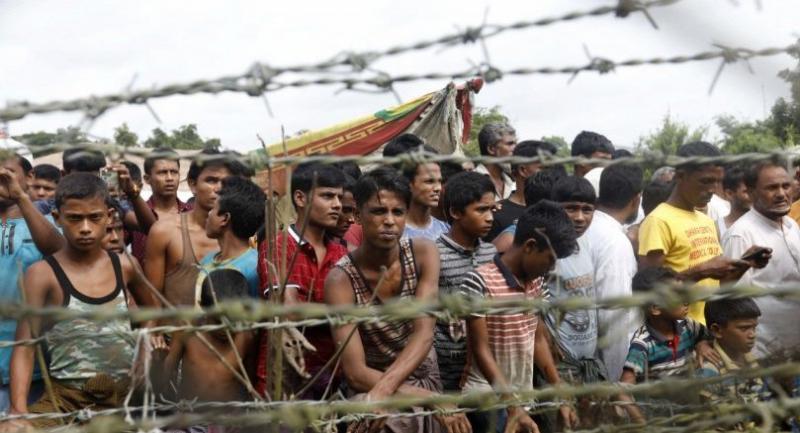 File photo : Rohingya refugees gather near a fence at the 'no man's land' zone at the Bangladesh-Myanmar border in Maungdaw district, Rakhine State, western Myanmar.//EPA-EFE

Yangon - Myanmar forces are conducting new rounds of "clearance operations" in conflict-hit Rakhine state after four local Buddhists were attacked and two killed, the commander-in-chief's office said Thursday, with one of the incidents blamed on Rohingya Muslims.

The violence occurred around the evening of December 17 along Pyu Ma creek in northern Rakhine state's Maungdaw township, the same area where forces waged a bloody crackdown against the Rohingya last year.

More than 720,000 Rohingya fled to Bangladesh after Myanmar launched clearance operations in August 2017, and UN investigators want the country's top brass prosecuted for genocide for alleged abuses carried out during the expulsion.

Myanmar said it was defending itself against Rohingya militants who attacked police posts and has denied almost all claims of atrocities.

But the commander-in-chief Min Aung Hlaing's office said in the statement posted to his official website Thursday that security forces were active again and had been carrying out "area clearance operations along Pyu Ma Creek."

The post said the activity was sparked after two ethnic Rakhine Buddhist men did not return from fishing and were later found on the creek bank with their throats slit.

On the same day two members of another ethnic Buddhist minority were attacked while fishing along the creek by six men "speaking Bengali language," but they escaped and were treated at a local hospital.

The post said authorities did not know the identities of the attackers.

Myanmar does not recognise the Rohingya as one of its national races and refers to them as Bengali to falsely imply they are newly arrived immigrants from Bangladesh.

Tensions are high in northern Rakhine as the government seeks to kickstart a repatriation process but Rohingya in Bangladesh have refused to take part without being guaranteed rights, citizenship and safety.

The Rohingya still in Rakhine are increasingly isolated, and several boats full of men, women and children trying to flee the state have been stopped in recent weeks and turned around.

The minority has long been persecuted and subjected to apartheid-like conditions in Rakhine, with lack of access to healthcare and freedom of movement curtailed.

Many fear that in their absence Myanmar is changing the landscape of their former homes for good, erasing all signs of their local history.