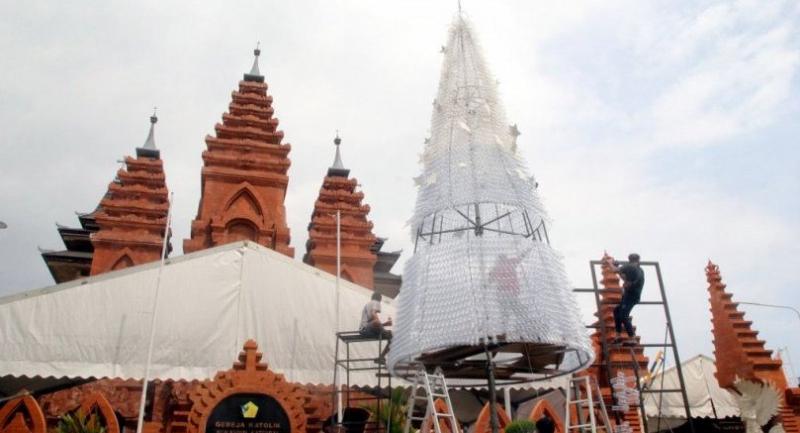 An 11metertall Christmas tree made from plastic bottles is erected at Denpasar Cathedral in Bali on Dec 20. Aside from enlivening Christmas celebrations, the tree promotes the reduced use of plastics.//JK Post

Bali has taken a big step to curb pollution in its seas, enacting a ban on troublesome single-use plastics like shopping bags, styrofoam and straws.

Bali Governor Wayan Koster announced the ban on Monday, as stipulated in Gubernatorial Regulation (Pergub) No. 97/2018, expressing hope that the policy would lead to a 70 per cent decline in Bali’s marine plastics within a year.

The new policy carries a six-month grace period dating from Dec. 21, when it was signed and took effect.

“This policy is aimed at producers, distributors, suppliers and business actors, including individuals, to suppress the use of single use plastics. They must substitute plastics with other materials," Koster said as quoted by tribunnews.

He added that administrative sanctions would be imposed on those who did not comply with the ban. “If they disobey, we will take action, like not extending their business permit," Koster said.

It has been difficult to trace the origins of the trash on Bali's beaches, but experts estimate that up to 80 per cent comes from the island.

The trash that informal workers collect from hotels and villages is often dumped in rivers, which then carry the waste out to sea. The trash eventually finds its way back to the resort island's beaches on coastal tides and currents.

Jakarta Environmental Agency head Isnawa Adji said that Jakartans had already agreed to reduce plastic waste. According to a survey by the Indonesia Plastic Bags Diet Movement, more than 90 per cent of Jakarta's residents agreed to reduce their use of plastics.

Isnawa said that one effort to reduce singleuse plastics was to limit drinking straws at restaurants, with other establishments to follow suit.

He said the agency would ask for input from stakeholders and residents in the months prior to enacting the ban.

The Finance Ministry's customs and excise directorate general is also mulling over a plan to excise plastic bags next year to reduce their use.