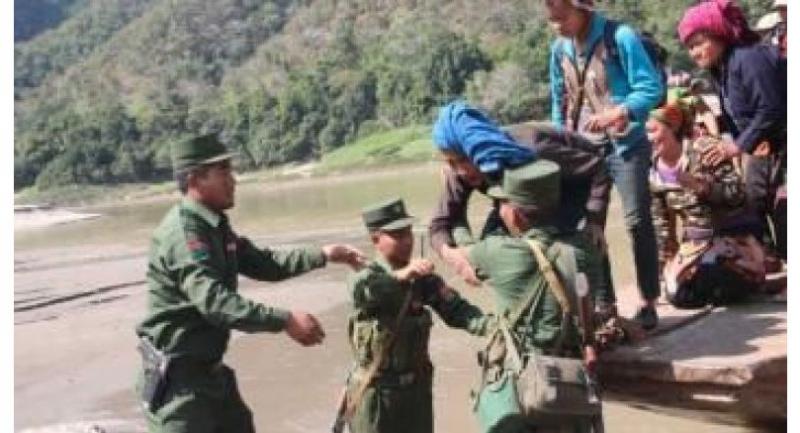 Since the fighting between Restoration Council of Shan State/Shan State Army (RCSS/SSA) and Pa-O National Liberation Organization (PNLO) in December last year, monasteries and homes have been burnt down, local residents stranded in the battle and some fled to safer places.

Both RCSS/SSA and PNLO are blaming each other for the clashes.

According to the news report released by RCSS-owned Taifreedom news agency on January 4, PNLO officials called a meeting with local Pa-O nationals on January 1 forcing them to serve in the Pa-O National Liberation Army (PNLA). They were asked to move to other places if they are not willing to serve in their army. Consequently, some villagers had to flee to the eastern part of the Thanlwin River.

Likewise, PNLO/PNLA's information department issued a press release on January 4 accusing RCSS of forcing Pa-O locals from several villages of Narmon Village-tract in Mongpang Township to leave their homes on December 31. Fearing the threat, about 300 local villagers fled to safer places through the eastern part of the river.

Nyi Rang, in-charge of UWSA's liaison office in Lashio, said Wa southern military region-171 warmly welcomed and accepted the internally displaced persons (IDPs). He added that they were being accommodated in Khaiklon Village in the southern Wa region.

"We are providing them with accommodation, food and healthcare. Whoever they are, ethnic Shan or Pa-O, we will take care of them. How long they will have to stay there depends on the situation. We will not force them to leave," said Nyi Rang.

A total of 62 households with 231 Pa-O people are taking shelter in Khaiklon Village. Of them, 94 are less than 12 years old.