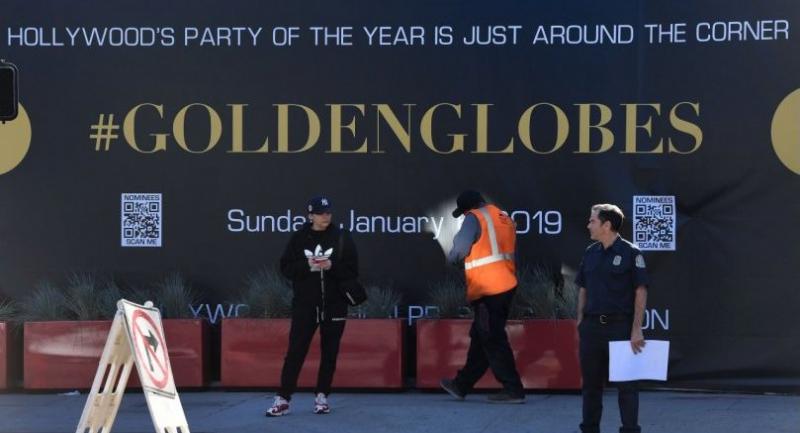 Workers and staff prepare the red carpet area for the 76th Golden Globe Awards at the Beverly Hilton hotel in Beverly Hills, California, on 4 January, 2019, to be held January 6.//AFP

Hollywood's brightest stars will hit the red carpet on Sunday for the first major awards show of the year: the Golden Globes, honoring the best in film and television.

Tens of millions of viewers are expected to tune in, but what should you be watching for? Here is our quick guide to the event, which will take place in Beverly Hills, California:

One of the big stories of Sunday night is sure to be the success of "A Star Is Born," Bradley Cooper's remake of the popular music romance that has five nominations including best drama film and best actress for Lady Gaga.

The pop diva could even take home two trophies, as she is also up for best song honors for "Shallow," the runaway hit from the soundtrack.

The film -- which stars Gaga as an unknown singer who rises to fame with the help of Cooper's fading, booze-addled rocker -- could be the singer-songwriter's ticket to an Oscar.

A Globes win would only boost her chances of an Academy Award nomination -- voting begins the day after the Globes gala, closes on January 14, and nominations are announced on January 22.

'Vice': will mixed reviews sink it?

"Vice," Adam McKay's quirky biopic about former US vice president Dick Cheney, was the top nomination getter for the Globes with six. But upon its theatrical release on Christmas Day, it earned decidedly mixed reviews.

Will that sink its chances at the Golden Globes?

Most critics agree that Welsh actor Christian Bale's transformation into Cheney is exceptional, but some quibble with the film's decidedly glib treatment of the politician's rise to power.

It is (curiously) competing in the comedy categories, and none of the awards experts polled by prediction website Gold Derby have it winning for best musical or comedy, instead favoring royal romp "The Favourite," race dramedy "Green Book" or "Mary Poppins Returns."

Bale has far better chances, and is seemingly locked in a tight race with Viggo Mortensen ("Green Book").

How will 'Roma' do at Globes?

"Roma," Alfonso Cuaron's critically acclaimed film chronicling his childhood in Mexico City, is not competing for best film honors at the Globes due to an eligibility issue, but will vie for best foreign film and best director awards.

Many believe Cuaron's personal drama will be a major Oscar winner -- and that a best director win on Sunday would solidify its chances.

"Cuaron is riding a huge wave of critical raves for 'Roma' and if there is any such thing as a front-runner when it comes to the Globes, this is it," Paul Dergarabedian of media analysis firm ComScore told AFP.

The television awards at the Golden Globes are sort of a wild card -- they are preceded by the Emmys, but the eligibility periods are not the same, meaning you end up with a mix of award-winners and new programs.

The 90-odd members of the Hollywood Foreign Press Association, who choose the Globes winners, are known for their maverick picks.

So, on Sunday, top Emmy winner like "The Marvelous Mrs Maisel" and "The Assassination of Gianni Versace: American Crime Story" will be pitted against new shows like "Homecoming" starring Julia Roberts and Netflix comedy "The Kominsky Method."

Will Roberts earn a trophy for her first starring role in a television show? Or will Globes host Sandra Oh take home an award for her work on the Emmy-nominated "Killing Eve"?

What about the hosts?

Can Oh and co-host Andy Samberg save the flailing awards show format?

In the age of social media, watching a three-hour gala with commercials in real time is increasingly unpopular.

Last year, 19 million people tuned in for the Globes. In September, the Emmys posted an all-time low audience of about 10.2 million.

Oh and Samberg earned laughs when they teamed up to present an award at the Emmys.

So far, their quirky promos for the gala have been well-received. And in an interview with The Hollywood Reporter, the pair promise a show high on fun and low on politics.

Tune in on Sunday.