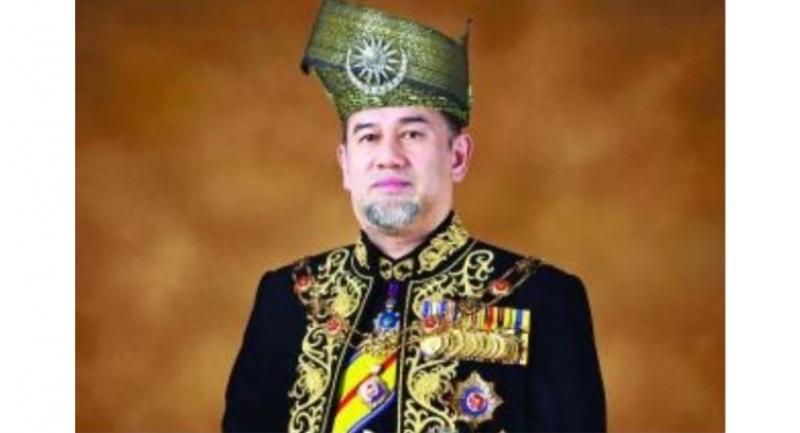 Malaysia's king abdicated Sunday in a historic first for the country that ended weeks of speculation about his future after he took medical leave and reportedly married a Russian ex-beauty queen.

Sultan Muhammad V's decision marks the first time a king has stepped aside during his five-year term in the Muslim-majority country.

The national palace confirmed the resignation with immediate effect of the 49-year-old, who had been on the throne for two years and was known for his fondness for four-wheel driving and other extreme sports.

"His majesty tells the people of Malaysia to continue to be united to maintain unity, tolerance, and work together," said a statement from the Comptroller of the Royal Household, Wan Ahmad Dahlan Abdul Aziz.

Malaysia's Islamic rulers will now meet to decide on the next king.

Malaysia is a constitutional monarchy, with a unique arrangement where the throne changes hands every five years between rulers of the nine Malaysian states headed by centuries-old Islamic royalty.

The system has been in place since independence from Britain in 1957.

Royal officials gave no reason for Sultan Muhammad V's move but there had been a question mark over the king's reign since he went on leave for medical treatment in November.

Reports in British and Russian media then surfaced saying that he had married the former Miss Moscow in the Russian capital in a lavish ceremony.

Royal officials in Malaysia have so far not commented on the rumoured marriage, or given any details about the state of the king's health.

Speculation intensified about the king's future after his medical leave officially finished at the end of December, and the country's Islamic royals reportedly held a special meeting last week.

While their role is ceremonial, Malaysia's Islamic royalty command great respect, especially from Muslim Malays, and criticising them is strictly forbidden.

Sultan Muhammad V studied at St Cross College at Oxford and the Oxford Centre for Islamic Studies, according to official media.

He is known for a relaxed public persona, taking part in walkathons to promote health, and has been photographed wearing a baseball cap backwards.

According to a report from official news agency Bernama at the time of his enthronement, he "fills his free time by reading and has an interest in extreme sports such as four-wheel drive expeditions and endurance challenges and shooting".

He is also the ceremonial ruler of the conservative Islamic northern state of Kelantan.

The palace statement said he was "ready to return home to the state of Kelantan to be together with the state government and... the Kelantanese people".

The palace did not indicate when the Islamic rulers would meet to pick the next king. During his leave of absence, the ruler of western Perak state had been carrying out his duties.

Portraits of the king and queen adorn government buildings throughout the country. The king is also the symbolic head of Islam in the nation, as well as the nominal chief of the military.

Malaysia's sultans trace a lineage back to Malay sultanates of the 15th century. The king is referred to as Yang di-Pertuan Agong, or "He Who Is Made Lord".

Meanwhile the Star quoted Comptroller of the Royal Household Datuk Wan Ahmad Dahlan Ab. Aziz as saying the King has resigned from his post in line with Article 32(3) of the Federal Constitution.

“His Majesty has informed this matter officially to the Malay Rulers through a letter issued to the secretary of the Conference of Rulers,” said Wan Ahmad in a statement on Sunday (Jan 6).

Wan Ahmad said the King, through his time in office has tried to fulfill his responsibilities as the Head of State, and played a part as an anchor of stability, source of justice, basis of unity and uniting factor among the rakyat.

The King has offered his thanks to the other Malay Rulers who had chosen him as the 15th Yang di-Pertuan Agong from Dec 13, 2016.

He has also expressed his highest appreciation to the Prime Minister and the Federal government for their cooperation.

“As the Commander in Chief of the Armed Forces, His Majesty is very proud with the sacrifices and loyalty that has been shown to His Majesty and the country all this while,” said Wan Ahmad.

Wan Ahmad said His Majesty has decreed that Malaysians continue to remain united, practice compromise and work together in shouldering the responsibilities towards this sovereign nation so Malaysia will continue to be in peace and harmony.