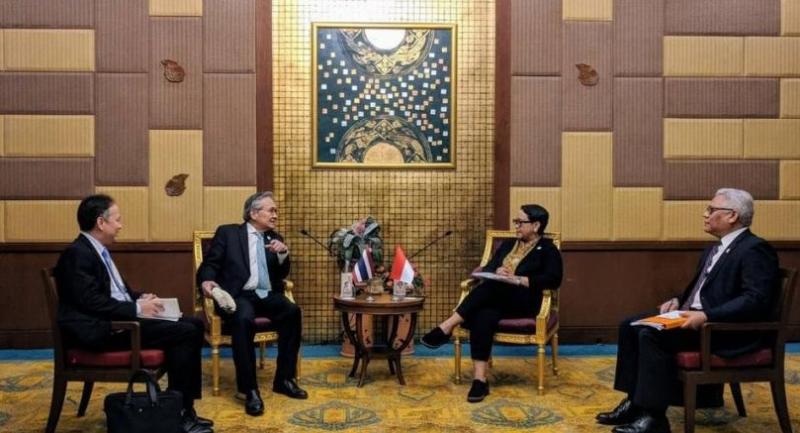 Asean foreign ministers will seek to find a common Indo-Pacific strategy during their informal meeting in Chiang Mai today to deal with the changing geopolitical situation.

Indonesian Foreign Minister Retno Marsudi and her Thai counterpart Don Pramudwinai, who had met before the New Year, held talks again yesterday to discuss a revised concept paper to be proposed by Indonesia, a source said.

Asean is exploring devising its own strategy to respond to the US Indo-Pacific Strategy initiated by the Donald Trump administration to balance the influence of a rising China in the region.

The Asean strategy will not bind it to any particular country and will focus on a “win-win” solution, the source said.

The Asean foreign ministers will also discuss how to play a role in easing the Rakhine crisis. Asean Secretary-General Lim Jock Hoi will be briefing the meeting about his mission to Myanmar in November.

The ministers will support the Asean Coordinating Centre for Humanitarian Assistance on Disaster Management to play a role in providing assistance to Myanmar and displaced persons.

The ministers would consider the implementation of the terms of reference proposed by the need assessment working group for the secretary-general to continue his work, Foreign Ministry spokesperson Busadee Santipitaks said.

More than 700,000 Rohingya people have fled the strife-torn Rakhine state since August 2017 when a militant attack on a security outpost drew a heavy-handed response from the Myanmar military. The refugees faced atrocities of arson, torture, murder, gang rape and massacre.

While Asean is ready to play a humanitarian role to help Myanmar and solve other problems in Rakhine state, ministers of the group need to listen to Myanmar on the role it wants Asean to play, Busadee said.

The foreign ministers have gathered in Chiang Mai for their first meeting after Thailand took over the leadership of the group this year. Under the theme “Advancing Partnership for Sustainability”, the ministers will endorse the chair’s plan to move Asean forward by making use of advanced technology, strengthened partnerships and enhanced connectivity as well as people-to-people ties, Busadee said.

Meanwhile, civil society people expressed their hope to see an Asean that cared for its people.

ChalidaTajaroensak, director of People’s Empowerment Foundation, one of the organising bodies of the Asean Civil Society Conference and Asean People’s Forum, expected the ministers to discuss democratic development and the human rights situation in the region.

“The Cambodian election has concluded but the situation has not improved. The internal situation is still unclear. Human rights defenders are living in fear and insecurity. The Thai election is being postponed repeatedly, and we don’t know the exact date,” she said.

The Asean People’s Forum would be held in the middle of June, prior to the first Asean Summit. “But if the [Thai] election is further delayed |or it not held, civil societies should |discuss our role in this issue. |We may not allow the forum to be held under a military government,” Chalida said.

Sunsanee Suthisunsanee, acting Thai representative of the Regional Steering Committee, one of the organising bodies of the people’s forum, questioned whether suggestions from civil society and regional civic participation would be taken seriously.