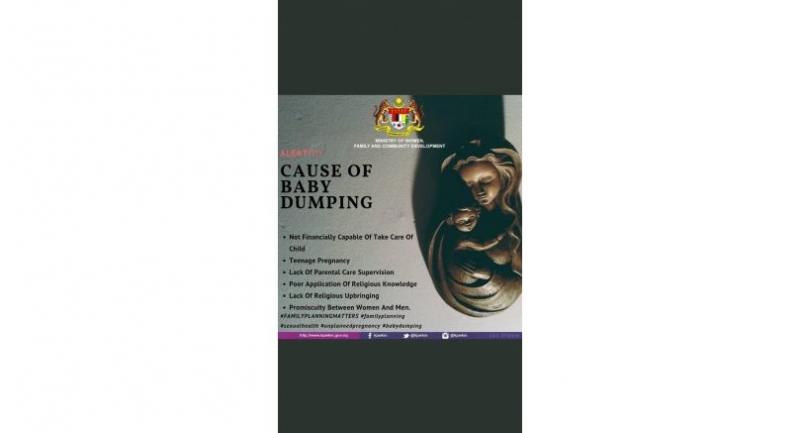 PETALING JAYA: A poster uploaded on the Twitter account of the Women, Family and Community Development Ministry has been criticised for stating that among the reasons for baby dumping was due to a lack of religious upbringing.

Its Deputy Minister Hannah Yeoh on Twitter had acknowledged the criticism and said that there will be an overhaul of all similar social media postings of her ministry.

"An overhaul of all similar social media postings by @KPWKM. Thank you for the feedback and there will be improvement," she tweeted on Thursday (Jan 17) night.

The ministry had initially put up messages about the causes of baby dumping.

Twitter user John Teo had criticised the poster, saying that blaming baby dumping on the lack of religious upbringing and promiscuity was "totally misguided".

"Placing vulnerable women and girls to shame have untold consequences. What we need is non-judgemental compassionate support. Please amend such posters," he said.

Meanwhile, Twitter user Shafiq Fernandez had also called for the shaming to end.

"Let’s stop the shaming! We need to provide a safe haven for women who are put in a situation where they can’t take care of their babies. Perhaps in the list one should add - reason for abandonment: irresponsible men!" he said.