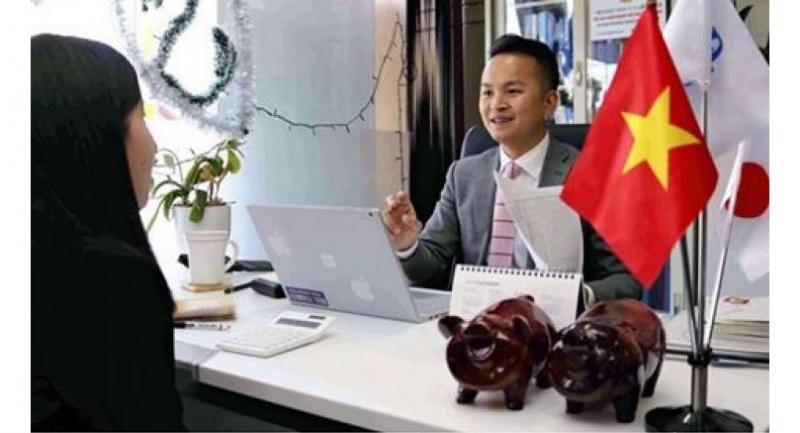 Nguyen Duy Hung, who goes by the Japanese name of Yuji Yamamoto, interviews job seekers at his company in Isesaki, Gunma Prefecture, on Friday.//Yomiuri Shimbun

More than a month has passed since the revised Immigration Control and Refugee Recognition Law was enacted. Under the law, the country will expand acceptance of foreigners into the workforce from April.

A number of longtime foreign residents in Japan have been increasing efforts to help new arrivals from their home countries. Having experienced difficulties dealing with the different language and customs, these residents have embarked on various activities to utilize their knowledge.

Some have set up companies to provide support services for newcomers, while a city government has begun training local foreign residents to support new arrivals.

“If you study Japanese more, it will help you at work,” said Yuji Yamamoto, 35, president of DS in Japan, a staffing agency for foreign workers. He was giving advice based on his own experiences to a Vietnamese student during a job interview in Isesaki, Gunma Prefecture, on Friday.

His real name is Nguyen Duy Hung, but he goes by the name of Yuji Yamamoto because he believes it makes it easier for him “to be more accepted in Japanese society.”

He came to Japan with his family at the age of 7 from Vietnam as a refugee. He learned Japanese when he was in elementary school and naturally began receiving calls for help from Vietnamese people around him.

After working for an equipment firm among other companies, he founded the business five years ago, hoping to “support the dreams of young people who come to Japan from my home country.” Currently, he employs about 70 people and dispatches workers to 10 companies.

A technical intern sent by his firm to a machine processing company made a number of mistakes because the intern did not fully understand the procedure. To resolve the situation, Yamamoto suggested compiling a manual in Vietnamese. Such actions have helped him earn the trust of his clients.

Some customs and behaviors that are not that unusual in Vietnam — such as being shirtless in public on a hot day or singing karaoke songs at home late at night — are generally frowned upon in Japan.

“We need a mediator who can understand how they feel and give them some advice, rather than simply telling them ‘Don’t do that’ without listening to them,” Yamamoto said.

In Shimosuwa, Nagano Prefecture, Kenji Kawanishi, a 34-year-old Brazilian of Japanese descent who has been in Japan for 18 years, established a company a year ago with a Filipino woman to support foreigners. He helps people of Japanese descent and others who do not understand Japanese and relevant rules at such places as local government offices, hospitals and police stations.

When he first came to Japan he faced some challenges because he did not understand Japanese. Once, when he asked a local government official to explain a tax issue, he was treated as if he was objecting to paying the tax. Also, a real estate agent turned him away when he was looking for a place to live.

Driven by frustration, Kawanishi studied Japanese, law and tax systems while working as a temporary worker in the manufacturing industry.

“I want to help foreigners so that they don’t have to struggle,” he said.

In local government offices, experienced foreigners are valuable resources. In Joso, Ibaraki Prefecture, where foreigners account for about 8% of the local population, the Joso city government started from this fiscal year training “peer supporters” to assist foreigners. Currently, six Brazilians of Japanese descent are working as peer supporters.

In Echizen, Fukui Prefecture, a special consultation service for foreigners has been set up. Three Brazilians and one Chinese work there on a full-time basis. A third-generation Japanese-Brazilian who works for the service said, “Because we are here, I think foreigners can come for consultations without worries.”