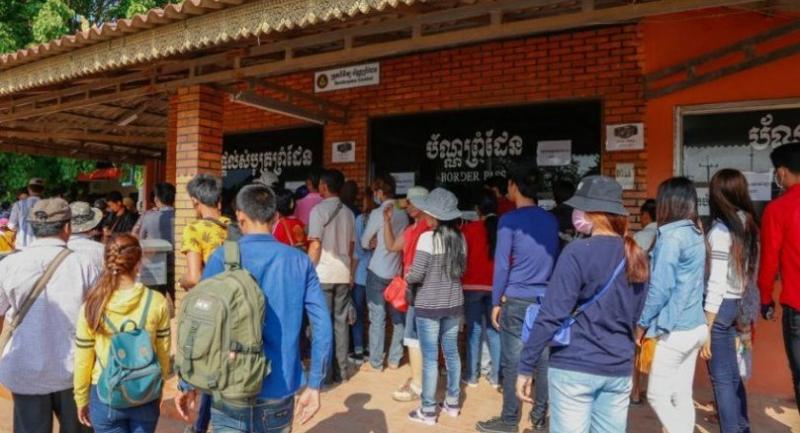 The Thailand Migration Report 2019 estimates that the country currently hosts about 4.9 million non-Thai residents, with some 3.9 million being documented and undocumented workers from Cambodia, Laos, Myanmar and Vietnam.

Constituting over 10 per cent of the total labour force, their work is thought to contribute between 4.3 and 6.6 per cent of Thailand’s Gross Domestic Product.

Nevertheless, many migrants continue to face hardship and remain vulnerable to abuse.

"While the situation for migrants in Thailand has improved in some ways since the last report in 2014, many challenges remain the same. Policy responses risk leaving migrants vulnerable and unsure of their legal status in Thailand," said the report’s editor Benjamin Harkins.

Moeun Tola, the executive director of the Center for Alliance of Labor and Human Rights, said based on the most recent estimates, there are about 1.7 million to two million Cambodian migrant workers in Thailand, with 20 per cent being undocumented.

He said documented workers have insurance from the National Social Security Fund, but some of them still face challenges because they cannot speak Thai. This leads to problems when they seek treatment at state hospitals. Some factories, he said, do not have translators for foreign workers.

Tola said most of those who have health insurance work for large companies, such as garment and electronics factories, but construction and agriculture sector workers, and workers at restaurants and small shops do not have access to this service.

"Another problem is their children. Children cannot attend school or receive other services from the state. This problem has not been settled yet and it requires Cambodia to ask Thailand to help solve the problem," he said.

Tola said some workers are arrested by Thai authorities because they entered using fake passports obtained through brokers.

He said some are undocumented and are cheated by Thai bosses. They work for several months, Tola said, but in the end, they do not receive their salary and sometimes bosses even call the Thai authorities to arrest them.

Tola said he is worried about fishing boat workers and some in the construction sector, as they were forced to take illegal drugs in order to have the energy to work, and they do not receive their salaries.

Nai Sambath, a worker in a towel factory in Thailand’s Chonburi province, said by phone that in the past two or three years, human rights violations and violence against Cambodian workers have reduced because most people are working legally.

"The situation of migrant workers in Thailand seems to be quiet. I mean it is stable because most of them are legal. But in some factories, their income is lower because Thailand’s economy is not very good either," he said.

Ministry of Labour and Vocational Training spokesman Heng Sour said the government has worked with the Thai government to achieve 100 per cent legality for the more than one million Cambodian migrant workers, but the ministry worries they might fall foul of Thailand’s labour laws.

"Though both governments worked with each other for six months in 2018 to offer legality for [the migrants], according to the Labour Law of Thailand, if they change their workplace without asking permission from Thailand’s Ministry of Labour, they might become illegal workers, and this is our concern," he said.

Sour said both governments have signed a Memorandum of Understanding in order to offer full rights in accordance with Thailand’s laws, such as those governing insurance – covering accidents, health and the receipt of full salaries.