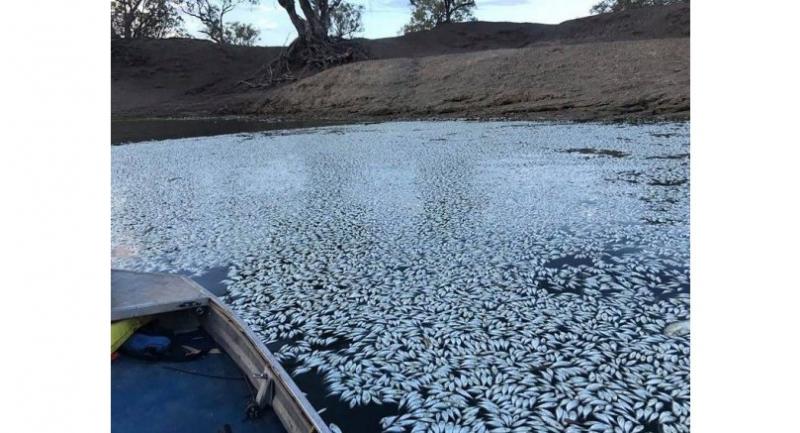 This handout photograph taken and received from Robert Gregory on January 29, 2019 shows scores of dead fish floating on the Darling river in Menindee.//AFP

Hundreds of thousands" of fish have died in drought-stricken Australia in the last few days and more mass deaths are likely to occur, the authorities warned Tuesday.

Locals around the Darling River were confronted with a sea of white, as dead fish carpeted the waters near the southeastern Outback town of Menindee.

Just weeks after up to a million were killed -- with scientists pointing to low water and oxygen levels as well as possibly toxic algae -- another mass death occurred in the key agricultural region.

Inspectors from the New South Wales Department of Primary Industries have visited the site and said they found that "hundreds of thousands of fish have died".

"Further fish deaths in the Darling River are anticipated as a significant number of fish have been observed under stress," the department said in a statement.

Some 700 kilos (1,543 pounds) of dead fish were removed from the river Monday, with similar amounts expected to be collected Tuesday, it added.

The Darling River is part of the Murray-Darling River system that stretches thousands of kilometres across several states.

Fisheries officials were also investigating reports of another fish kill further south in the Murrumbidgee River, which flows into the Murray-Darling system.

With temperatures expected to rise and no rain forecast, there remained a "high risk of further fish kills over the coming days and week", officials said.

While the federal government has blamed the deaths on a severe drought, experts and locals say they stem from the systemic depletion and pollution of the river.

The inspectors added that the latest bout of kills were likely linked to "critically low levels of dissolved oxygen" caused by a sharp drop in temperatures after an extended period of hot weather.

Six aerators were installed along parts of the Darling River to give surviving fish localised oxygenated water.

"It's not a case of not being able to spend money on something, there just isn't any other alternative that anyone has offered up," Blair said.

"The only thing that will really change these conditions at the moment is fresh water coming through the system and there is just no possibility of that at the moment."

Australia's eastern inland regions have been hit by a prolonged drought, with extreme heatwaves in recent weeks exacerbating conditions.

The late arrival of the monsoon season in northern Australia has also contributed to heatwaves in some regions.

The wet season eventually kicked off in mid-January, with record-breaking floods hitting the tropical top end of the vast continent, cutting communities off and stranding farmers in recent days.