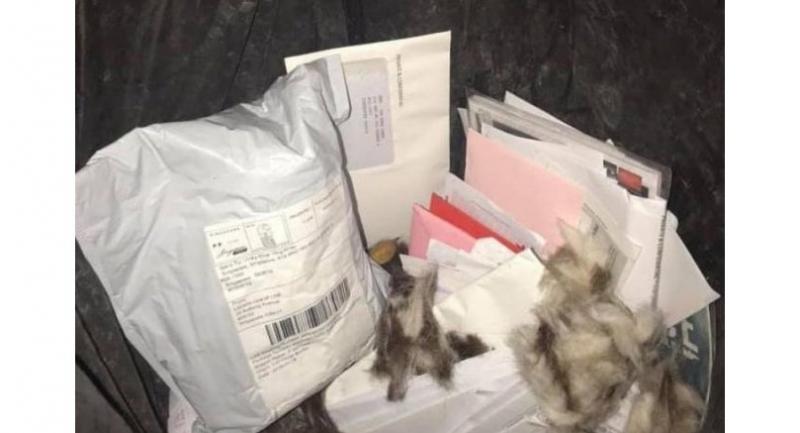 Ms Alyce Kathlyn claimed that the postman had discarded letters and parcels in the bin.//PHOTO: FACEBOOK/ALYCE KATHLYN

SINGAPORE - A postman serving 17 Housing Board blocks in Ang Mo Kio was arrested on Tuesday (Jan 29), following SingPost’s investigations into a case of unopened letters and packages allegedly tossed into a rubbish bin.

The postal service provider’s actions follow a Facebook post by user Alyce Kathlyn on Monday night, which shared eight images of the discarded letters in the bin.

Going by the photos, there were letters from the Land Transport Authority, the National University of Singapore, and for the Community Health Assist Scheme, among others.

In its statement on Tuesday afternoon, SingPost said that it has referred the case to the police following findings from internal investigations.

The police confirmed that a report has been lodged and a 29-year-old man was arrested.

The Straits Times understands that he was arrested for allegedly committing theft as a servant.

SingPost said that it is unable to comment further as the police is investigating the case. The postal service provider also thanked Ms Kathlyn for highlighting this case.

Ms Kathlyn had claimed in her Facebook post that the postman had discarded the letters and parcels in the bin.

"This is not the first time we've found this in Ang Mo Kio," she wrote in the Facebook post, which has at least 145 comments and 3,800 shares.

On Tuesday, SingPost said on its Facebook page that it was aware of the images of the discarded letters that have been circulating online.

A SingPost team was dispatched to comb the area overnight, it said.

While the bin was located, the team was unable to find the discarded letters, despite expanding its search to other bins in the vicinity, said SingPost.

The team also opened letter boxes to check if the letters were delivered to the affected recipients. SingPost also interviewed the postman on duty.

"Our main priority currently is to locate the letters and have them delivered to intended recipients," the postal service provider said.

Some social media users, including Ms Kathlyn, left comments on SingPost's Facebook page, demanding a thorough investigation and an explanation.

Facebook user Tiong Low also claimed that his tenant, who lives at Block 177 Ang Mo Kio Avenue 4, has not received mail for the past two months.

"I told her to continue monitoring and to update me. Mail hardly (goes) missing in Singapore... I demand an investigation and answer from your office," the user wrote.

In its latest statement on Tuesday, SingPost said that residents of the affected blocks may call its hotline on 6845-6222 between 9am and 9pm on weekdays if they require assistance or if they are aware of any other incidents of discarded mail.

“SingPost does not tolerate any mishandling or misappropriation of mail,” it said.  “Any postman found to have committed such offences will be disciplined, and, where applicable, dealt with by the full extent of the law.”

Earlier this month, the postal service provider drew ire from customers for its apparent poor delivery service during the year-end peak season.

Many of them took to social media to complain about letters and packages that were not delivered or delayed.

SingPost later apologised for its "service failures" and added that it will be reviewing and improving its operational procedures.

In response to queries, the Infocomm Media Development Authority (IMDA) said that they take a serious view of any incident that impacts the reliability, integrity and security of Singapore’s public postal services.

“Under the Postal Services Act, it is an offence for any officer, employee or agent of a postal licensee to destroy or throw away any postal article or anything contained therein,” IMDA said.

“IMDA will take appropriate action against anyone found guilty of contravening the Postal Services Act.”

The authority also expressed “grave concerns” over the latest incident and “the spate of recent service lapses by SingPost”.

The postal service provider must comply with its public postal licence requirements and quality of service standards, IMDA added.

“SingPost must investigate all complaints and feedback raised, and take urgent steps to improve its service standards and restore public confidence in its postal services.”