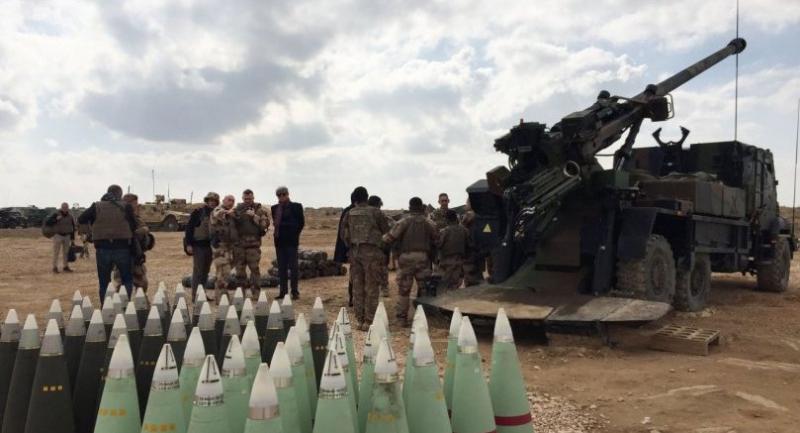 Hasakeh, Syria - US-backed forces were locked in fierce fighting Sunday as they pressed the battle against the last shred of the Islamic State group's "caliphate" in eastern Syria.

The jihadists overran large parts of the country and neighbouring Iraq in 2014, but various military offensives have since reduced that territory to a patch on the Iraqi border.

The Syrian Democratic Forces (SDF), supported by a US-led coalition, announced a final push to retake the jihadist pocket late Saturday, after a pause of more than a week to allow civilians to flee.

An SDF field commander said his fighters were battling their way forwards on Sunday morning.

"There are heavy clashes at the moment. We have launched an assault and the fighters are advancing," he told AFP.

"The battle is ongoing. There were heavy clashes this morning, with landmines going off," said Rami Abdel Rahman, the head of the Britain-based Observatory.

The SDF launched an offensive to expel IS from the oil-rich eastern province of Deir Ezzor in September.

The Kurdish-led alliance has since whittled down jihadist-held territory to a scrap of just four square kilometres (one square mile) between the Euphrates and the Iraqi border.

Up to 600 jihadists could still remain inside, most of them foreigners, according to SDF spokesman Mustafa Bali.

But he added the extremist group's elusive leader Abu Bakr al-Baghdadi was likely not in the pocket.

"We do not think he is in Syria," Bali said, without adding any details about the whereabouts of the man who declared a cross-border IS "caliphate" in 2014.

On the Iraqi side of the border, French members of the coalition on Saturday stood ready to pour fury on any IS diehards seeking to escape.

Dozens of 155-mm shells were lined up ready to be loaded onto three green-and-black Caesar gun-howitzers with a range of 40 kilometres (25 miles).

At the height of their rule, the jihadists imposed their brutal interpretation of Islamic law on a territory roughly the size of Britain.

But separate military offensives in both countries, including by the SDF, have since retaken the vast bulk of that "caliphate".

On Saturday, Bali said he expected the battle for the last patch of IS territory to be over in days.

The jihadists however retain a presence in Syria's vast Badia desert, and have claimed a series of deadly attacks by sleeper cells in SDF-held areas.

Since December, more than 37,000 people, mostly wives and children of jihadist fighters, have fled out into SDF-held areas, the Observatory says.

That figure includes some 3,400 suspected jihadists detained by the SDF, according to the monitor, which relies on sources inside Syria for its information.

The SDF holds hundreds of foreigners accused of belonging to the extremist group in its custody, as well as members of their families.

They have urged Western governments to repatriate their nationals, but politicians abroad have been reluctant.

Relatives at home fear alleged foreign jihadists may end up facing tough justice in Iraq instead, where Human Rights Watch warned they could face "torture and unfair trials".

The issue of jihadist repatriation has come into sharper focus since the United States in December announced its military withdrawal from Syria.

That announcement has seen the Kurds warn they may struggle to keep jihadists in jail, and pushed them to seek a new ally in the Damascus regime to prevent a long threatened Turkish offensive.

While the Kurdish People's Protection Units (YPG) have been a key US ally in the fight against IS, Ankara views them as "terrorists".

Syria's Kurds have largely stayed out of the country's civil war, instead building semi-autonomous institutions in northern and northeastern regions they control.

Syria's conflict has killed more than 360,000 people and displaced millions since erupting eight years ago after a brutal crackdown of anti-government protests.

Rebels and jihadists seized large parts of the country in the first years of the war.

But President Bashar al-Assad's regime has made a military comeback with Russian military support since 2015, and now holds almost two-thirds of the country.

SDF-held areas make up a third of the whole country, and Damascus has repeatedly said it would eventually see them revert to government control.