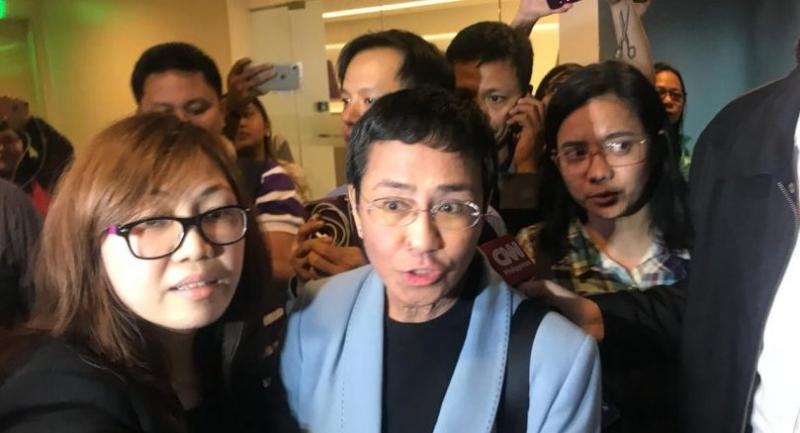 Agents of the National Bureau of Investigation (NBI) conducted the arrest at around 5 p.m., even as the warrant was already issued by the Manila Regional Trial Court Branch 46 on Tuesday, February 12.

As she was being ushered out of her office, Ressa said she was shocked by her sudden arrest. “It’s a shock, but we are going,” she told reporters.

She also said that the NBI agents treated her professionally during the serving of the warrant.

(They told me that, “Ma’am, we’re just doing our job.”  I will say is there are a lot of people who said they are just doing their jobs, but we should look at what this job really is.)

Ressa, who also faces five cases of tax evasion before the Court of Tax Appeals and the Pasig City Regional Trial Court, said she will not be silenced by any amount of criminal charges.

“We are not intimidated. No amount of legal cases, black propaganda, and lies can silence Filipino journalists who continue to hold the line,” she said.

“These legal acrobatics show how far the government will go to silence journalists, including the pettiness of forcing me to spend the night in jail,” she added.

Ressa’s cyber libel case stems from the complaint of businessman Wilfredo Keng, who was the subject of Rappler’s article titled “CJ using SUVs of a controversial businessman” published in 2012.

The CJ referred to in the story was former Supreme Court Chief Justice Renato Corona, who was then under an impeachment trial.

Keng had denied the allegation and requested Rappler take down the article.  Rappler instead updated the story in 2014.

Ressa will spend the night at the office of the NBI after a Pasay City night court refused to accept bail for her case.