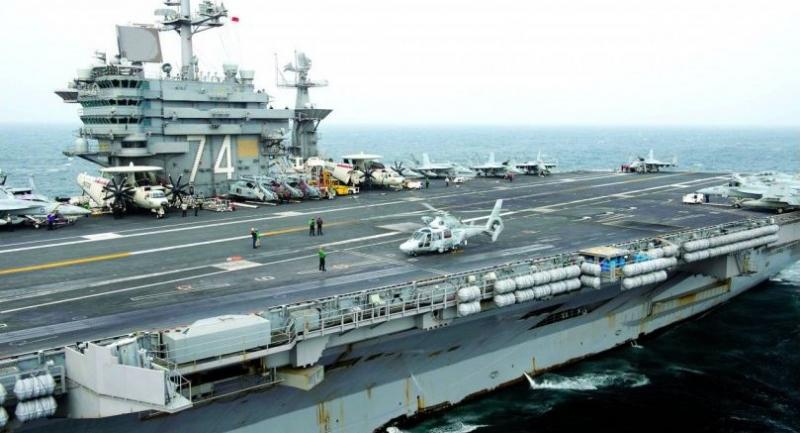 A file picture of the USS John C Stennis, which has been docked at Laem Chabang port since Tuesday as part of the annual Cobra Gold military exercise held in Thailand.

The US aircraft carrier USS John C Stennis has been anchored at the Laem Chabang deep sea port as a display of the close military ties Thailand enjoys with the United States. The aircraft carrier arrived on Tuesday, when the Cobra Gold military exercises were launched, and will be leaving today.

“Our mission is to maintain a peaceful presence and support international law by sailing in international waters,” Captain J Patrick Thompson, carrier executive officer, told reporters during a tour of his vessel.

Initiated in 1982, Cobra Gold is the largest Asia-Pacific military exercise held in Thailand every year. The training in recent years has mostly focused on humanitarian and disaster relief, but Thompson did not disclose what role his ship took in the drill.

Participating countries include the US, Thailand, Singapore, Malaysia, Indonesia, Japan and South Korea. The drill was launched on Tuesday and will last until February 22.

“Our objective here in Thailand is to strengthen the long-standing ties as well as to give our crew members some rest,” Thompson said.

Members of the Thai Royal Navy were also present during the press tour.

The USS John C Stennis is capable of accommodating up to 6,200 sailors and marines. With a 330-metre-long flight deck and a height of nearly 75 metres, the carrier has four catapults and four lifts and can accommodate up to 70 tactical aircraft. It has two anchors, each weighing 30 tonnes.

First commissioned in 1995, the USS John C Stennis has been to Thailand several times, the most recent being in 2012, and has completed eight full deployments on international waters.

The carrier is named after late senator John C Stennis, who served in the US senate for up to 41 years. Stennis stood firm by his belief in maintaining US military superiority, with a strong navy at the top of his agenda. The USS John C Stennis carrier also features a museum dedicated to the senator.

When asked if the carrier has sailed through the contentious South China Sea, Captain Thompson said yes, adding that the sea was a very busy area.

The captain, however, did not disclose where his vessel will be heading next, adding that the USS John C Stennis can remain offshore for as long as needed as they can have supplies dropped off to maintain operations.

He explained that supplies can be replenished in two ways: by air via helicopters and aircraft, and by sea where ships can be connected with fuel hoses and cables.

“The most difficult part of the job is not knowing how long a deployment will last,” a crew member said. “I’ve been on missions that have lasted from two to six months.”